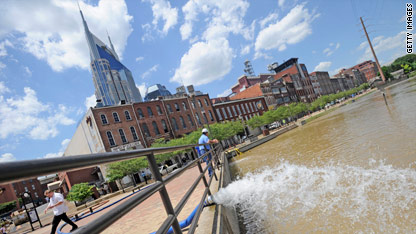 Workers try to pump water from flooding back into the Cumberland River along in Nashville, Tennessee.

[Updated at 7:27 p.m.]  Water continued to recede in flood-struck Tennessee Thursday, as the Cumberland River fell below flood stage for the first time since heavy rains last weekend overflowed it.

As of Thursday afternoon, the river stood at 39.5 feet, or about half an inch under flood stage, officials said.

The waters had receded in much of the city of Nashville, six days after the record-setting rains swelled rivers to historic levels and flooded several neighborhoods.

[Updated at 1:23 p.m.] Nashville's major business and government district, Metro Center, reopened at noon Thursday. Business owners and workers were allowed back on to their properties at Metro Center, though the area was still closed to the public.

Other parts of downtown were also reopened Thursday to residents and shop owners, the Nashville mayor's office said.

[Updated at 10:37 a.m.] The death toll has risen to 31 in three states from a massive weekend storm system that devastated parts of the Southeast, authorities said Thursday. 21 people were killed in Tennessee and the same storm system killed six people in Mississippi and four in Kentucky, emergency management officials said. The death toll could rise as rescue crews continue to search for several people who have been reported missing, including two kayakers in Kentucky and several people in Tennessee, officials said.

[Updated at 9:25 a.m.] "Nashville has obviously been hard-hit, and it's a well-known city, but there are so many other counties in the state and areas ... that have been hit very hard as well," Gov. Phil Bredesen told CNN from Nashville on Thursday morning."A lot of people who didn't have flood insurance, because they never thought flood waters would ever come anywhere near their home, are really looking at a total loss of their home," he said. "It's very tough on a lot of people right now."

The governor said 21 people had died in his state.  One of those deaths was related to a tornado spawned by the weekend storms, the Tennessee Emergency Management Agency said on its website.

[Updated at 8:31 a.m.] Twenty-one people have died in Tennessee from the flooding in the state, and the number may still rise because some people are missing, Gov. Phil Bredesen told CNN on Thursday.

[Posted at 7:49 a.m.] Six days after record-setting rain swelled rivers to historic levels and sent a torrent of water rushing through Nashville, Tennessee, much of the city of about 1 million people remained flooded.

Submerged, yes. But not at a standstill, the city's mayor proclaimed.

"We are coming out of this thing," Mayor Karl Dean said Wednesday night. "This has been devastating, but right now we're going to be focused on getting our city back up and working. "

The city government reports back to work Thursday, Dean said. Bus services resume. Teachers and staff at schools return to work, with students following the next day.

The iconic Country Music Hall of Fame is also expected to reopen before week's end.

Nashville "will remain Music City and we will go forward doing what we've been doing," Dean said.

As rescue and recovery crews continued to look for more bodies, the death toll across the southeast from the weekend storm stood at 28 on Wednesday.

Nineteen of the deaths were in Tennessee - nine in Nashville alone. Two residents are still missing, Dean's office said.

The mayor estimated the flood damage to his city to easily top $1 billion.

The worst, however, may have passed.

Even though the Cumberland River, which cuts through Nashville, stood about 13 feet above flood stage Wednesday, the flood waters should recede significantly in the next couple of days.

"We're not expecting a significant amount of rain through Monday," said Jim Moser of the National Weather Service.