Peloton recalls treadmills linked to the death of a child and 70 other injuries, saying it was wrong not to do so eŌĆtwitter.com/i/web/status/1ŌĆ”cD

Facebook can continue to block former President Trump but must review the penalty, the company's independent OversiŌĆtwitter.com/i/web/status/1ŌĆ”vF

Violence breaks out at Greek protests

Thousands of demonstrators had gathered in front of Parliament to show their anger, and as dusk fell bottles were thrown at police, who responded with tear gas and pepper spray, said CNN's Diana Magnay, who was at the scene. 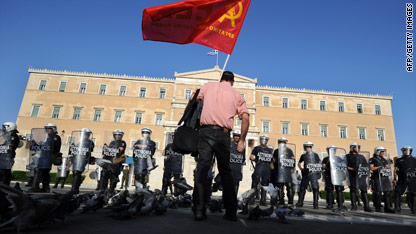 A protestor waves a flag as police line up in front of the Greek Parliament in Athens.

The government is cutting public-sector salaries, raising the retirement age and imposing new taxes in order to secure billions of euros in loans from the European Union and International Monetary Fund.

Demonstrations Thursday were smaller and generally more peaceful than a day earlier, when general strikes turned violent and three people were killed when a bank was fire bombed.

Two British offshore patrol vessels will be sent to the island of Jersey "as a precautionary measure" amid an escalŌĆtwitter.com/i/web/status/1ŌĆ”bU
cnni

5:51 pm ET May 5, 2021 RETWEET
A pair of new studies that project how much the world's major land ice masses could contribute to sea level rise shŌĆtwitter.com/i/web/status/1ŌĆ”sk
cnni

4:31 pm ET May 5, 2021 RETWEET
Firefighters in Tennessee had to help bust a 2-year-old boy out of an antique wooden barrel after he climbed in andŌĆtwitter.com/i/web/status/1ŌĆ”Kq
cnni