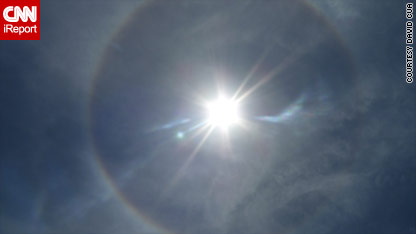 This morning CNN iReport woke up to a flurry of photos of what look like a halo around the sun in Cebu, Philippines. iReporter David Cua, who shared the photo here, said he and his friends were trying to figure out what on earth it was they were seeing.

Actually, halos are an optical phenomenon that occur around the sun or the moon while there are very high cirrus clouds in the atmosphere. They can even be seen in very cold weather around street lamps or other artificial sources of light. Halos are caused by light reflected and refracted by ice crystals.Ā The colors occur because as the light is refracted, the wavelengths are split into the red, orange, blue, that you see in the halo. It is more common to see halos at night around the moon, so this halo that we see in the Philippines is somewhat rare.

You might be wondering why there would be ice crystals in the air above the Philippines during the Northern Hemisphere summer.Ā Even in the warmest places on the globe, the very high levels of the atmosphere are very cold. In the tropics this time of year temperatures at the top of the troposphere are around -95 degrees Fahrenheit (-70 degrees Celsius).

Halos are somewhat different than the even more rare sun dogs, seen when the sun is very low in the sky, almost on the horizon. Sun dogs are characterized by the halo that we see here in these iReports, as well as bright patches of light to the right and the left of the sun along the halo.

If you spot a halo (or, for that matter, another interesting weather phenomenon), we'd love to see it on iReport.

12:00 am ET January 17, 2022 RETWEET
The imprints of the once vast ancient Roman Empire have made their presence known in discoveries this week across Eātwitter.com/i/web/status/1ā¦gU
cnni