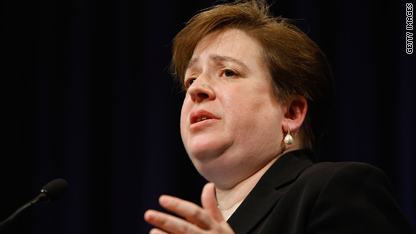 The nomination is expected to be announced Monday at 11 a.m. ET, another source familiar with the process said.

Kagan, 50, a New York native, was widely reported to be the frontrunner for the nomination. She was a finalist for the high court vacancy last year when Justice Sonia Sotomayor was selected to replace the retiring David Souter.

Kagan would be the third woman on the nine-justice bench if confirmed.

CNN is working to confirm the report.

Kagan is a former Harvard Law School dean and has never served as judge. As solicitor general, she is the Obama administration's top lawyer before the Supreme Court and has argued several high-profile cases before the justices since taking the job in spring 2009.

Kagan was a law clerk for Justice Thurgood Marshall and served as associate White House counsel in President Clinton's administration.

- CNN's John King and Bill Mears contributed to this report.