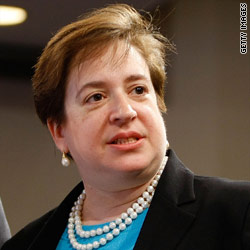 On Monday, President Obama is expected to name the solicitor general as his nominee to replace retiring Justice John Paul Stevens on the Supreme Court. If confirmed, Kagan, 50, would be the third woman on the nine-justice bench and the fourth in the history of the court.

Kagan grew up in a Jewish household in the Upper West Side of Manhattan. She went on to Princeton University and Harvard Law School, where she later served as dean. She was an associate White House counsel in the Clinton administration.

She served as a law clerk for federal judge Abner Mikva, and then for Thurgood Marshall on the high court. In her 1986 job application to Marshall, she rather matter-of-factly told the civil rights pioneer, "I would be honored to serve as your clerk."

The former Air Force major will be among hundreds of U.S. veterans on Capitol Hill on Monday to lobby for the repeal of "don't ask, don't tell."

In 2006, during a routine search of his computer files, someone found that his "morale" was being supported by the person he loved - a man. The e-mail from his files was forwarded to his commander, and Almy was relieved of his duties after serving 13 years active duty.

Almy, who was deployed to the Middle East four times and received various medals and several Officer of the Year honors, told CNN that he enlisted as an 18-year-old and was not fully aware of his sexuality when he signed up.

In an April letter to President Obama, he wrote that despite the way he was treated, "my greatest desire is still to return to active duty as an officer and leader in the United States Air Force, protecting the freedoms of a nation that I love; freedoms that I myself was not allowed to enjoy while serving in the military."

She was Lena Horne.

The singer, dancer and actress died in New York City on Sunday night at the age of 92.

She was one of the first African-Americans to sign a long-term movie contract with a major Hollywood studio when she joined MGM in 1942. Horne complained she was used as "window dressing" in white films, mostly limited to singing performances that could be easily edited out for play in Southern theaters.

"I think the black boy that cleaned the shoes and me were the only two black people, except the maids who were there working for the stars," Horne said in a CNN interview. "And it was very lonely, and I wasn't very happy."

Horne was an active supporter of the Rev. Martin Luther King Jr. and was there when he delivered his "I Have a Dream" speech on the Lincoln Memorial steps in 1963.

The Detroit Tigers on Monday night at Comerica Park will pay tribute to legendary broadcaster Ernie Harwell - who died last Tuesday at 92 - when Jose Feliciano once again sings "The Star-Spangled Banner."

The Detroit Free Press reports that hasn't happened in 42 years. At Harwell's invitation, on October 7, 1968, before Game 5 against the Cardinals at Tiger Stadium, Feliciano sang a stylized version of the national anthem, accompanying himself on guitar.

An uproar followed, and Harwell had to defend Feliciano and his patriotism. The blind musician from Puerto Rico told the newspaper, "I certainly didn't want to sing the anthem the old, monotonous way. I was an immigrant who came to this country, and I wanted to express my feelings for America."

The left-hander pitched the 19th perfect game in major league history Sunday, leading the Oakland Athletics to a 4-0 victory over the Tampa Bay Rays.

The Boston Globe reports that it was the first perfect game for Oakland in 42 years. Braden made news most recently when he became angry after Yankees star Alex Rodriguez walked across the pitcher's mound April 22.

But the newspaper reports Rodriguez changed his tone yesterday. "I've learned in my career that it's always better to be remembered for some of the good things you do on the field, and good for him," Rodriguez said from Boston. "He threw a perfect game. And, even better, he beat the Rays."