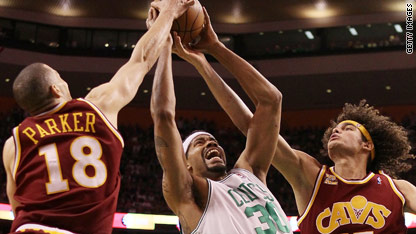 The Celtics and Cavaliers face off in Cleveland tonight for Game 5.

The Celtics pushed the reset button on their Eastern Conference semifinal with the Cavaliers, rebounding from an embarrassing loss thanks to a performance for the ages by Rajon Rondo to turn the series into a best of three.

How will MVP LeBron James and Co. respond as the series shifts back to Cleveland for tonight’s Game 5 (8 p.m., TNT)? It could all depend on how they deal with Rondo, who has exploited the East’s top-seed to the tune of 21.8 points, 13 assists and 8.3 rebounds per game, including a 29-18-13 game in Boston’s Game 4 win.

The assignment of slowing down the Celtics’ one-man show could fall on James. Cavs coach Mike Brown has hinted he may use LeBron, who was voted onto the NBA all-defensive first team for the second straight year, on Rondo as Cleveland tries to avoid a 3-2 deficit heading back to Boston.

The NBA and NHL playoffs take center stage, while baseball, soccer and tennis are also on the schedule. Here are the rest of today’s highlights, with all times Eastern.

*Blackhawks at Canucks (9:30 p.m., Versus). The Canucks stayed alive in the Western Conference semifinal series, taking Game 5. Now comes the hard part, at least in this series: winning at home. Both teams have two road wins, with Chicago winning Games 3 and 4 by a score of 12-6.

$200 million – Cost of the NASCAR Hall of Fame in Charlotte, which opens its doors today. The hall’s inaugural class, which includes Dale Earnhardt, Junior Johnson, Richard Petty and Bill France and Bill France Jr., will be inducted on May 23.

25.5 – The Magic completed a sweep of the Hawks with a 98-84 win. Orlando won all four games in the series by an average of 25.5 points, making it one of the most lopsided series in NBA history.

1 – The Lakers beat the Jazz 111-96 to hand Utah its first four-game sweep in the franchise’s 24 playoff appearances.