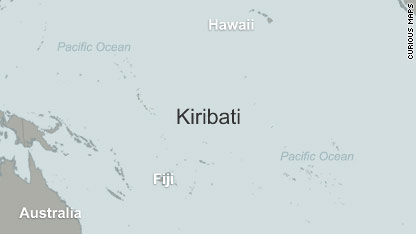 Residents of Kanton Island said they were malnourished and starving because a government supply ship hadn't been able to get there.

A British sailor delivering a yacht from Hawaii to Australia may have been a life-saver for 24 inhabitants of a remote Pacific island.

Yachtsman Alex Bond decided to make a stop Sunday at Kanton Island, part of the Phoenix Islands in the nation of Kiribati, during his trans-Pacific delivery voyage, according to a release from the British coastguard.

Greeting him on the island were 24 malnourished residents, including 10 children. They had been living on only fish and coconuts for two months because a Kiribati government supply ship that normally brings their food had not been able to get to the island, CNN affiliate ABC News in Australia reported.

The island, which is surrounded by several uninhabited islands, is about 2000 miles from and midway between Hawaii and Fiji in the Pacific.

ŌĆ£We had no idea of the trouble they were in when we arrived. The adults were in a poor state and the children were suffering serious malnutrition,ŌĆØ Bond told The Falmouth Packet by phone.

Bond gave the islanders the few supplies he could spare from the yacht and used a satellite phone to contact the British coastguard station in Falmouth, England, near his home in Penryn, British authorities said.

ŌĆ£So far, we have been given a shopping list of provisions such as cooking fat, rice, sugar and flour,ŌĆØ the British coastguard said.

"That's the extent of our involvement thus far. A relief ship is supposed to be bringing supplies to them but we have not been asked for help," he said.

ŌĆ£It is a beautiful island in the middle of nowhere, but their regular delivery of food had failed to show up and was at least five weeks away,ŌĆØ Bond said in the Packet report.

ŌĆ£WeŌĆÖre not leaving until I know they are okay. They are wonderful people,ŌĆØ he told the Packet.

Kanton, the only island in the Phoenix group with a permanent population, served as an air base for U.S. forces during World War II and later as a missile tracking station.

WPost: ŌĆ£The confirmation of the meeting provides new evidence of the success that the presidentŌĆÖs allies had in gtwitter.com/i/web/status/1ŌĆ”XyWBri
susancandiotti

China is trying once again to lift the spirits of its huge tech industry after a bruising regulatory offensive thatŌĆtwitter.com/i/web/status/1ŌĆ”gs
cnni

8:30 am ET May 18, 2022 RETWEET
US Soccer reaches a historic deal that will provide equal pay for both its men's and women's national teams playingŌĆtwitter.com/i/web/status/1ŌĆ”jK
cnni

8:15 am ET May 18, 2022 RETWEET
In recent years, Australia has been battered by record-breaking rains, floods and wildfires, causing loss of livesŌĆtwitter.com/i/web/status/1ŌĆ”ku
cnni

US Soccer reaches a historic deal that will provide equal pay for both its men's and women's national teams playingŌĆtwitter.com/i/web/status/1ŌĆ”W2
cnnbrk

10:46 pm ET May 17, 2022 RETWEET
The US Food and Drug Administration has granted emergency use authorization for a booster dose of Pfizer/BioNTech'sŌĆtwitter.com/i/web/status/1ŌĆ”Uj
cnnbrk

11:00 am ET May 17, 2022 RETWEET
Iran-backed Hezbollah has lost its parliamentary coalition majority in Lebanon's first election since the country'sŌĆtwitter.com/i/web/status/1ŌĆ”fG
cnnbrk