Florida tries get out message: No oil on our beaches 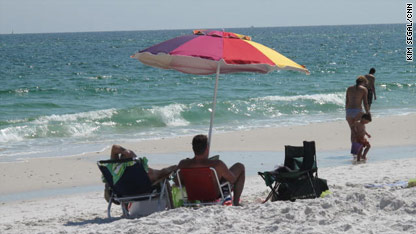 The beach at Pensacola, Florida.

Officials in Florida would like the world to know that the state's 663 beaches and the water that surrounds them are oil free.

A message that Florida Gov. Charlie Crist wants $34.75 million to spread. In a letter to BP, the company at the center of the oil spill problem in the Gulf of Mexico, Gov. Crist asks for the money to start a marketing campaign. This campaign would "counter the negative, widespread and false information potential visitors to Florida are receiving," a statement from the Governor's Press Office says.

It's not just Florida's $60 billion tourism industry that is being impacted by misperceptions about the location of the oil slick, FloridaÂąs seafood industry is also feeling the effects.

Out-of-state retailers have decreased their orders for Florida seafood and charter boats are reporting a large number of cancellations.

"People seem to think our seafood is bad and our waters are contaminated, even though the oil spill is nowhere near our coast," says Liz Compton from Florida Department of Agriculture and Consumer Services.

While Florida officials work on getting their message of an oil free state out to the public, crews continue to work around the clock to try and stop the leaking oil.