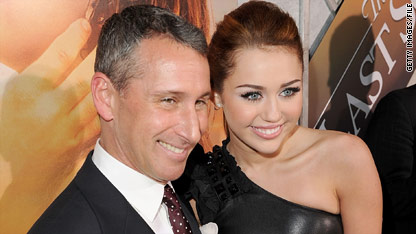 Director Adam Shankman and Miley Cyrus at the premiere for "The Last Song."

Miley Cyrus - She warned us, maybe we just weren't listening. At first she was just being Miley. Then she was partying all over the country (and dancing on what some people called a stripper pole.) That was followed by a message from the clearly over-being-a-Disney-aged-star singer saying she can't be tamed. She's still got her contract with Disney, but her recent videos and lyrics couldn't be sending a clearer message that our little Miley wants to break out of Disney's cage - Scuttle style - and not be viewed as just a kid anymore. It also has sparked a debate about whether Cyrus, who is still in her teens, has been acting age appropriate. On Wednesday the debate continue after TMZ posted a video of her dancing with 44-year-old director Adam Shankman (of "So You Think You Can Dance," "A Walk to Remember," "Bringing Down the House," and "Hairspray" fame.) A photo of Cyrus and Shankman together when she was filming Shankman's movie "The Last Song" caused a similar uproar a few months ago on Twitter.

"Lost" and Across the Sea - It looks like Losties are still searching for answers. With just a few more hours of the show left, last night's episode "Across the Sea" promised big reveals and big answers. But as usual in this show, there is one rule that normally holds true, the answer to most questions is another question. Based on the fact that "Lost" and the episode title "Across the Sea" are still trending at extremely high rates across social media sites, apparently they don't have their answers. So we are continuing searching, Tweeting, reading EW.com's Lost mythology codebreaker Doc Jensen's initial recap and waiting for his in-depth explanation that may make us have an "a-ha" moment.

Losties are always searching though, but today seems to be different. Today, people seem to be upset. It was an episode many people are saying they had waited years for - one they hoped would give final answers - yet somehow they ended up feeling cheated. Which means the frantic searching that viewers do (the same way the characters search for their meaning on the island) is now out of frustration instead of curiosity. Viewers seem to not be satisfied with the results - and while we know there are no easy answers on Lost - we also know the clock is ticking on what is regarded by many (myself included) as one of the best TV shows to hit the airwaves and create a cultural phenomenon in a long time. The question is now, will the writers and producers be able to satisfy what has ultimately become an obsession with the search for answers. For now, it appears viewers will just keep on searching.

Giant oarfish - Another day, another strange creature most of us haven't heard of. Today, the web lit up with searches for "giant oarfish" and with good reason based on a story in Sweden's The Local newspaper which reported a man found the fish known as the "King of Herrings," which hadn't been seen in Sweden in 131 years. If you've never heard of the fish, you'll want to click on The Local's story or start Googling - if nothing else for the photo alone.

Seattle's Best - Being Seattle's Best is apparently no longer good enough for the company - that is, they want to be even bigger and better. As The Consumerist blog puts it, Seattle's Best is expanding and they are about to be "absolutely @#$%& everywhere". It's a battle of the coffee vendors and Starbucks, which owns the brand, appears to be on the verge of a good old-fashioned throwdown with Dunkin' Donuts and McDonald's by adding 30,000 locations - even Subway, Burger King and AMC Theaters.