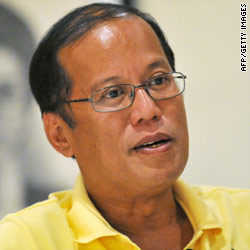 Aquino told CNN on Tuesday that politicians must be responsible to those who elected them.

"We are public servants," he said. "You're the public, you're the masters, you're the one with wants and needs that should be wanted and delivered. And we'll bring it back to that point."

That meant making it possible for people to improve their lives, he said.

Aquino, nicknamed "Noynoy," is the son of the former president and Sen. Benigno "Ninoy" Aquino Jr., who was assassinated in 1983 as he returned from exile to lead opposition to Cold War-era Philippine strongman Ferdinand Marcos.

Corazon Aquino, who died in August, took over the leadership of her husband's movement and became the country's first female president in 1986.

The Atlanta, Georgia, attorney captured 5,559 votes and won the race for the state's Senate District 42 in DeKalb County on Tuesday. The Atlanta Journal-Constitution reports that Carter will serve the remainder of the term of former state Sen. David Adelman, whom President Obama appointed as U.S. ambassador to Singapore.

Although the General Assembly is no longer in session, state law requires the seat be filled, and Carter told the newspaper there's work to do now.

"There's a lot that can be done behind the scenes if I'm a state senator, especially with setting policy infrastructure, building relationships and getting ready to hit the ground running in the Senate," Carter told the newspaper.

The 29-year old woman admits she falsely claimed to be an FBI executive.

Reilly pleaded guilty in federal court in Alexandria, Virginia, to impersonating an FBI employee, which could land her up to three years in prison.

According to court documents released Tuesday,Reilly began claiming to several neighbors in ArlingtonÂ last summer that she was an assistant director of the FBI and director of the bureau's forensic division. By November she said she was looking to hire two assistants. Two neighbors filled out what appeared to them to be genuine FBI forms and were told they were hired.

"Some of the duties involved transcribing interrogations supposedly conducted by Reilly," the court document said. "Other duties included editing condolence letters to the families of CIA officers who died in the January bombing in Afghanistan; Reilly claimed the CIA officers were working for her." Peter Carr, the spokesman for the U.S. attorney's office in Alexandria, said, "It was never clear why she did this."

The creator of hit TV shows such as "Nip/Tuck" and "Glee" is asking people to boycott Newsweek magazine.

Entertainment Weekly obtained Murphy's open letter, which reads, in part, "I would like to join my good friend Kristin Chenoweth on her condemnation of a recent Newsweek article written by Mr. Ramin Setoodeh, in which Setoodeh basically says that out gay actors should go back into the closet and never attempt to play straight characters. ... Today, I have asked GLAAD president Jarrett Barrios to stand with me and others and ask for an immediate boycott of Newsweek magazine until an apology is issued to Sean Hayes and other brave out actors who were cruelly singled out in this damaging, needlessly cruel, and mind-blowingly bigoted piece."

On May 15, having already passed her comprehensive finals and turned in her 50-page research paper, she will graduate from Fort Hays State University in Kansas with a Master of Liberal Studies in history. Ochs is 98 years old.

According to the university, she will be the oldest person ever to receive a master's degree.

"I'm very gratified to have attained that distinction," she said. "I would like, in the long run, to encourage people to keep on learning. Our education is never complete."

A former teacher in a one-room school, Ochs got her bachelor's degree in 2007, and then-governor and now U.S. Secretary of Health and Human Services Kathleen Sebelius personally handed Ochs her diploma.

She's expecting 50 relatives at this year's graduation. She plans to continue to take courses and may work toward a Master of Arts in history and, the university reports, compete for one of the three graduate teaching assistantships in that department that will be available in spring 2011.