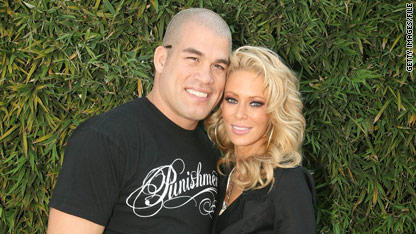 Tito Ortiz will not face charges after an arrest following a fight with his girlfriend Jenna Jameson.

Ortiz, 35, was arrested at his Huntington Beach, California, home April 26 after Jameson's father called police as the couple argued.

The prosecution may have been complicated by Jameson, 36, giving several different accounts of what happened.

Cameras captured Jameson alternately saying Ortiz was "the sweetest, most amazing man" and later saying that he had beaten her.

In a statement four days later, she said she wanted to reconcile with Ortiz, a mixed martial artist who is the father of her twin toddler sons.

"Unfortunately, what actually happened has now been dramatically distorted and misinterpreted and remarks that both Tito and I made after the police arrived reflect the state of shock that we were both in," Jameson said.

"He's a fantastic father and I'm confident we can work through this challenge," she said.

A police spokesman said at the time that the couple's reconciliation was "irrelevant" to the prosecution of Ortiz since it is the state of California, not Jameson, who filed the charge.

A restraining order preventing Ortiz and Jameson from reuniting was lifted last week and the couple was seen together in public with their children.

Tears rolled down his cheeks as Ortiz spoke to reporters just hours after he was released from jail.

The argument began because he thought Jameson had relapsed in her rehabilitation from a prescription drug addiction, he said.

Ortiz is a former light heavyweight champ in the Ultimate Fighting Championship competition.