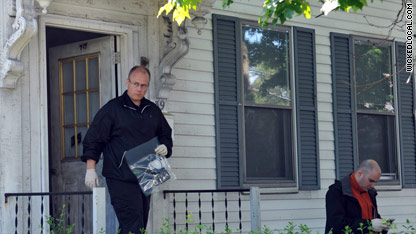 Suffolk County Police spokesman Tim Motz told CNN that officers from that department are assisting the FBI in the execution of these warrants. There have been no arrests.

[Updated at 12:19 p.m.] A third person has been arrested on immigration charges in Thursday's raids in the Northeast, a U.S. official told CNN.

[Updated at 12:08 p.m.] Prompt Printing, a printing shop in Camden, New Jersey, is among the targets of Thursday's raids by federal agents stemming from the investigation into this month's failed car bombing in Times Square, a federal law enforcement source said.

A federal source also says a home in Cherry Hill, New Jersey was raided and that it is believed to be the home of the print shop's owner.Â

[Updated at 11:41 a.m.] A source close to the investigation says the raids carried out this morning were focused on a system of â€ścash couriersâ€ť who bring money into the United States from overseas. Some of that money is thought to be made available to finance operations like the abortive Times Square attack. The source says the warrants for Thursdayâ€™s raids came as a result of the investigation into the Times Square incident, but it has not been determined conclusively if the alleged courier system under investigation is tied to that plot.

The source says two individuals have been under surveillance at least since Wednesday, but could not confirm that they were the individuals arrested today. The source says there is no direct evidence linking those under surveillance to the courier system, but they are being investigated for possible links. The source adds that Faisal Shahzad continues to provide information to investigators. [Updated at 11:23 a.m.] The search warrants being executed in the Northeast on Thursday are related to the probe of Faisal Shahzad's financing, a federal law enforcement source said.

The source said the locations may have been involved in transferring money to Shahzad, the suspect in the recent botched Times Square car bombing. However, there is no specific information to indicate any of the individuals at these locations knew about the Times Square bombing plot, the source said.

[Updated at 10:35 a.m.] A federal law enforcement source says that the two people taken into custody for alleged immigration violations have no direct bearing on the Times Square investigation. The arrests are described as "collateral.â€ť

The two are from Pakistan, according to a U.S. official. One is a so-called "visa overstay." The other was in the process of being removed from
the United States, but had not yet been ordered removed, as he was attempting to adjust his status so that he could stay.

[Updated at 10:27 a.m.] Lt. Phillip Harrington of the Brookline Police Department confirmed to CNN that local police are assisting the FBI conduct a search warrant at a Mobile gas station on Harvard Street in Brookline.

[Updated at 10:00 a.m.] CNN affiliate WHDH in Boston is reporting search warrants were executed at a gas station in Brookline, Massachusetts and a home in Watertown, Massachusetts in connection with the Times Square attempted bombing earlier this month.

[Updated at 9:33 a.m.] A federal law enforcement source says that search warrants are being executed in Boston, New York, and New Jersey.

â€śWe can confirm that search warrants have been executed in several locations in the Northeast in connection with the investigation into the attempted Time Square bombing," a Justice Department official told CNN. "Two individuals encountered during the searches were taken into federal custody for alleged immigration violations.

"At this time we can provide no further details as the investigation is ongoing. These searches are the product of evidence that has been gathered in the investigation subsequent to the attempted Times Square bombing and do not relate to any known immediate threat to the public or active plot against the United States.â€ť

"They do not relate to any known immediate threat to the public or any plot against the United States," Marcinkiewicz said.

She said two people have been taken into custody for "alleged immigration violations."