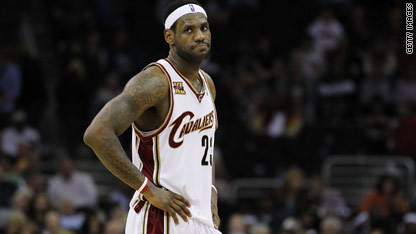 Many critics have said LeBron James' performance tonight could have a large impact on his future as a free agent.

After playing one of the worst games of his career Tuesday while passively settling for jump shots as his Cavaliers were surrendering their home-court advantage in an unfathomable 120-88 Game 5 loss to the Celtics, the league MVP must now galvanize Cleveland to win Game 6.

So writes SI.comās Ian Thomsen of LeBron James, the Cleveland star who looked more MIA than MVP two days ago in Cleveland. Given James can be a free agent this summer and potentially change the course of two franchises, the game in Boston tonight has unlimited implications for the futures of many in the league. It is the five-star highlight for sports fans tonight, an absolute must-watch game.

-Cavaliers at Celtics (8 p.m., ESPN)
Over the past 24 hours James has faced a level of criticism unlike any he has seen in his athletic life. Even NBA legend Kareem Abdul Jabbar weighed in, saying James would have benefited from college and would have arrived in the NBA with "very polished" skills.

This particular Cleveland team was built to win a title and a second-round loss would be frankly inexcusable. It will also create even more of a cottage industry for speculation on what James will do as this summer as he becomes a free agent after the 2010 NBA playoffs.

For now he and his teammates have more immediate concerns: How do they stop the Celtics at home in an elimination game?

"When you look at Cleveland, you know you've got to stop LeBron," Celtics star Paul Pierce told SI.com following Game 5. "With us, we've got four or five guys who can lead using scoring, from me, Rondo, Ray, KG. You never know where it's going to come from and that's what makes us so dangerous."

1993
Year the Montreal Canadians last made the Stanley Cup finals. Last night Montreal stunned Pittsburgh at home in Game 7 to win the Eastern Conference semifinal series, 4-3. They will play the winner of he Flyers-Bruins series for the opportunity to advance to the Stanley Cup Finals.

0-3
Record of LeBron James-led NBA teams when facing elimination on the road.

0
hits allowed by Nationals prospect Stephen Strasburg last night over six innings. Strasburg was making his second start for the Syracuse Chiefs, a 4-0 victory over Norfolk.

12:30 pm ET December 4, 2022 RETWEET
Reaching the knockout stages of this tournament, most pundits determined beforehand, was achievable for the USMNT bātwitter.com/i/web/status/1ā¦B1
cnni

12:30 pm ET December 4, 2022 RETWEET
Reaching the knockout stages of this tournament, most pundits determined beforehand, was achievable for the USMNT bātwitter.com/i/web/status/1ā¦B1
cnni

11:54 am ET December 3, 2022 RETWEET
A man has been arrested and charged with murder in connection to the killing of Migos rapper Takeoff, the Houston Pātwitter.com/i/web/status/1ā¦Hy
cnnbrk