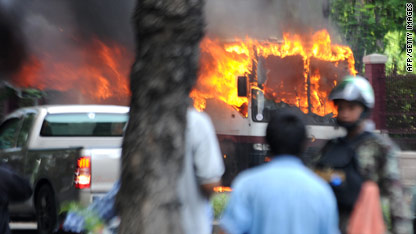 [Updated at 8:49 a.m.] The casualty toll in Bangkok has risen to four dead and 53 wounded in clashes between anti-government demonstrators and government security forces, emergency officials said Friday.

[Posted at 8:40 a.m.] At least two people have been killed and 42 injured in clashes in Bangkok, Thailand in the last two days, emergency officials said.

Video footage showed "at least one person lying on the floor with a severe head wound. They appear to be dead," CNN's Dan Rivers reported from Bangkok, amid "pretty fierce shooting" in parts of the city.

If confirmed, the person Rivers mentioned would make the third fatality since protests turned violent again on Thursday.