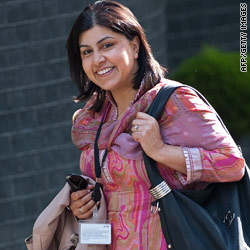 The new British government not only has its youngest prime minister in almost 200 years and the first peacetime coalition Cabinet in 65 years, it has the first Muslim woman to be a full member of the Cabinet.

Warsi has been named minister without portfolio. It's not immediately clear what her responsibilities will be, a spokesman for the government said.

Not yet 40 years old, she's also just been appointed chairwoman of the Conservative Party. On her website, she names her proudest political achievement as securing the release of a British teacher from jail in Sudan when the woman was accused of insulting religion.

Gillian Gibbons had been accused of allowing her students to name a teddy bear "Muhammad." Warsi flew in to help negotiate her release. A trained lawyer from Dewsbury in northeast England, Warsi also lists herself as a campaigner on racial justice, forced marriages and prison conditions.

Conservative factions in the Anglican Communion - a 77 million-member denomination worldwide, with the Episcopal Church as its U.S. branch - have opposed the ordination of gay bishops.

Glasspool becomes the second female bishop in the 114-year history of the Episcopal Diocese of Los Angeles, elected last December only hours after the first: the Rev. Diane Jardine Bruce, who will also be consecrated as a bishopÂ  Sunday.

Glasspool, who has been an ordained priest for 28 years, is the daughter of an Episcopal priest, the diocese said.

They answered the call of duty and undoubtedly saved many lives.

The National Association of Police Organizations will present the two U.S. Army Emergency Police sergeants with "Top Cop" awards on Friday night in Washington, D.C. They earned them.

On November 5, 2009, Maj. Nidal Malik Hasan, an Army psychiatrist, allegedly walked into the Readiness Center at Fort Hood, Texas, and began firing. He is accused of killing 12 soldiers and one civilian, and injuring 38 other people.

According to the Top Cop award citation, what happened in those four minutes was, "an undeniable national tragedy and one that would have been far worse without the courageous actions of Sergeant Kimberly Munley and Sergeant Mark Todd. Relying on their training and courage, Sergeants Munley and Todd engaged Hasan within seconds of arriving on the scene. Sergeant Munley took three bullets in her efforts to end the killing rampage. Still, Sergeants Munley and Todd were ultimately able to take down Hasan and put a stop to one of the nation's most notorious acts of terrorism."

On September 12, 2001, the chairman and CEO of the Korey Kay & Partners advertising agency in New York City coined a phrase that is still saving lives today.

The New York Times reports that Kay's slogan, "If You See Something, Say Something," was trademarked by the Metropolitan Transit Authority, which has given more than 50 organizations across the United States and overseas permission to use it in public awareness campaigns.

Times Square street vendors made police aware that something was amiss with a smoking Nissan Pathfinder on May 1.

Kay told the newspaper, "I'm proud of what it's done and the potential it has to do more," he said of the slogan. "Some things you just can't stop. But if it is stoppable, and that thought makes someone think twice and say something that stops something, that's its reason for being."

New York Times: A phrase for safety after 9/11 goes global

It's a hard-knock life. There's a good chance that somewhere in the United States today, a big-voiced young girl in a red dress is on a stage, betting her bottom dollar that the sun will come out tomorrow. But after June 13, "Little Orphan Annie" will end as a newspaper comic strip.

According the New York Daily News and the website Comic Book Resources, with only 20 newspapers now carrying the strip, Tribune Media Services has decided to stop syndicating the adventures of Annie, Sandy and Daddy Warbucks.

Cartoonist Harold Gray's take on smiling through the Great Depression debuted in the Daily News on August 5, 1924. For the last six years, Slampyak has been drawing Annie, her friends and her enemies.

"It's kind of painful," Slampyak - also known to fans for his web comic "Jazz Age Chronicles" - told the newspaper. "It's almost like mourning the loss of a friend.

Comic Book Resources: It's the hard-knock life for 'Annie' as syndicate cancels strip

Hurricane Ian made landfall in Cuba, bringing significant wind and storm surge, as it churns toward Florida. Followâ€twitter.com/i/web/status/1â€¦IQ
CNNweather

7:29 am ET September 27, 2022 RETWEET
People in the northern Philippines were bracing for landslides on Monday after five rescue workers were killed in tâ€twitter.com/i/web/status/1â€¦rO
CNNweather

2:44 pm ET September 26, 2022 RETWEET
Tampa hasnâ€™t had a direct hit from a hurricane in 100 years, said Davis. It has had several close calls and severaltwitter.com/i/web/status/1â€¦Fxtb
CNNweather

Hurricane Ian made landfall in Cuba, bringing significant wind and storm surge, as it churns toward Florida. Followâ€twitter.com/i/web/status/1â€¦IQ
CNNweather

7:29 am ET September 27, 2022 RETWEET
People in the northern Philippines were bracing for landslides on Monday after five rescue workers were killed in tâ€twitter.com/i/web/status/1â€¦rO
CNNweather

2:44 pm ET September 26, 2022 RETWEET
Tampa hasnâ€™t had a direct hit from a hurricane in 100 years, said Davis. It has had several close calls and severaltwitter.com/i/web/status/1â€¦Fxtb
CNNweather