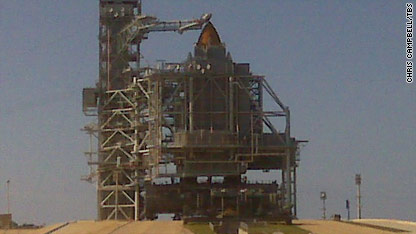 The next shuttle flight won't come until September maybe October.  That was supposed to be the last.  The July mission, for technical reasons, may not fly now  until next February.  And maybe, just maybe, NASA will add one more perhaps next June.  It's all up in the air, pardon the unintentional pun.

About all that is clear is that thousands of people are losing their jobs I first started covering the space program back in 1982 not long after the very first flight of Columbia.  There was so much euphoria back then.  The new era in space travel had just begun. The most complicated vehicle ever built by humans was flying and coming back landing on a runway. That had never been done before in human history.

A week ago in Houston I interviewed John Young and Bob Crippen.  They are in the history books as the commander and pilot of STS 1 Columbia, the first flight. There was some talk back then both men told me of perhaps flying that flight unmanned.  No way, both men say the argued.  Like the Mercury 7 boys, these two men had the right stuff!  They flew that mission and for the first time a spacecraft flew with humans before it was tested with an unmanned flight.

Thousands of people gathered here for that moment in history.  Since then, I've seen the crowds thin over the years.  Shuttle flights became, except when there were accidents,  too routine to garner much attention.

But now, the people are back! In just 30 minutes, the visitors center here sold out of 9,000 tickets to watch the launch from a viewing area.

People want to see it one more time or for the first time. Now that it is going away, the love affair with the shuttle has been rekindled.

I can't count how many I've seen a launch and it never gets old.  My heart  always skips a beat at liftoff.  It's a love affair I hate to see coming to an end.

Check out our multimedia interactive if you're thinking about making a trip for the last few launches and we'll give you tips on where to go, what to see and where you'll find the best seat for the launch.