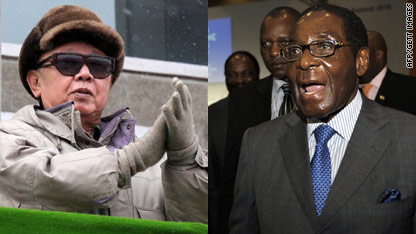 “Baby elephants normally continue to suckle from their mothers for 4 years, so removal at this young age could have a severe physical impact in terms of nutrition, immunity and other developmental issues. It is also certain to have a huge impact on the emotional and social development of the young animals,” the group’s statement said.

Other animals to be included in the transfer include black and white rhinos, cheetahs, lions, leopards, giraffes and zebras, according to news reports.

Johnny Rodrigues, head of the Zimbabwe Conservation Task Force, said teams of trappers are working in the Hwange park around the clock to fulfill the Mugabe order, according to a report in The Zimbabwean newspaper. He said his group was trying to enlist international influence to block the transfer.

North Korea’s zoos do not meet international standards, he said.

Born Free agreed. “Our fear is that the facilities in North Korea would fall far short of even the most basic requirements for the physical and psychological well-being of the animals,” the organization said.

But according to a report from The Standard newspaper in Zimbabwe, the country’s parks chief, Vitalis Chadenga, said Zimbabwe is sending experts to North Korea to be sure the animals are properly cared for.