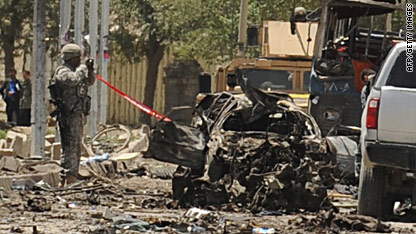 Investigators examine the site of an attack in Kabul, Afghanistan that killed

The suicide bomb attack in Kabul Tuesday underlined that the Taliban are still very capable of causing substantial carnage in the Afghan capital – months after promises that security would be tightened.

The minivan – with an estimated 1,500 pounds of explosives – was driven into a U.S military convoy on a busy thoroughfare called Dar-ul-aman Road, and close to a U.S. military base, Camp Julien. 18 people were killed.

The Taliban had warned about such attacks in a communiqué issued earlier this month announcing its spring offensive. “The Al-Faath operations will target the invading Americans, NATO military personnel, foreign advisers, spies who pose as foreign diplomats, members of the Karzai stooge administration … ” and many others.

After the last such attack in Kabul three months ago, in which 14 people were killed in an attack on a hotel and shopping center, there were promises that security in the capital would be improved. And for a while there were no major incidents. But this attack will revive anxiety about the ability of Afghan security forces to make the capital - and important military and government installations - safe.

Among the questions bound to be raised: did the suicide vehicle pass through any checkpoints? Was there any intelligence about the planned attack? And are the Afghan National Police capable of providing security in Kabul – or anywhere else in Afghanistan?

That final question is the one that NATO commanders return to time and again.

Just last Friday, U.S. Marine Major General Richard P. Mills described in a teleconference from Helmand province that progress in training Afghan police was "baby steps but progress nonetheless.”  On Monday, U.S. Admiral James Stavridis, NATO’s Supreme Allied Commander, appealed for more police trainers. Describing the training program as his most important mission, Admiral Stavridis has appealed to NATO partners to help bridge the shortfall of 450 trainers, and says “there may be a few hundred more needed by early next year.”

With some allies reducing their commitments in Afghanistan, U.S. troops are having to fill the void. Earlier this month a battalion of the U.S. 82nd Airborne Division deployed from Stuttgart, Germany. "Somebody has to step forward. If nobody does this, the training doesn’t get done and we don’t accomplish our mission," Col. Gregory T. Breazile, a spokesman for the NATO training mission, told “Stars & Stripes.”

Last month, General Stanley McChrystal submitted to Congress his half-yearly assessment of progress in Afghanistan. It includes a stark acknowledgment of the difficulties in training the ANP.

“Currently, 1,810 trainers are assigned out of the 4,083 trainers required, resulting in 44 percent staffing rate.” Later the report admits: “There is overall concern among the U.S. interagency and the international community regarding the ability of the ANP not only to grow but also to improve the quality of both basic police training and the quality of the fielded force.”

Among Afghan civilians, there is little trust of the police. Many recruits to the ANP are illiterate – about 85 percent cannot read or write adequately. Fifteen per cent of recruits test positive for illegal drug use; and illicit drug use continues to be a problem even among serving offcers. There is a high rate of recidivism, although better pay has improved retention.

In Kandahar last month, CNN’s Michael Holmes saw at first hand the problems NATO trainers were experiencing in getting recruits trained in just a few weeks. And when coalition forces cleared the Marjah area of insurgents in February, they handed over security duties not to the regular police, but to the better-trained and equipped Afghan National Civil Order Police. And even the conduct of that elite force has since been criticized by locals in Marjah, with the Taliban widely reported to be re-establishing a presence in the area.

The training program for the ANP has been revamped this year to a “recruit-train-assign” model. That may sound a statement of the obvious, but in Afghanistan it’s almost a revolutionary step to ensure police recruits receive necessary training before performing official duties. Right now, the Training Mission says it is on target to have 109,000 ANP by October. But questions will persist about the quality of those recruits.