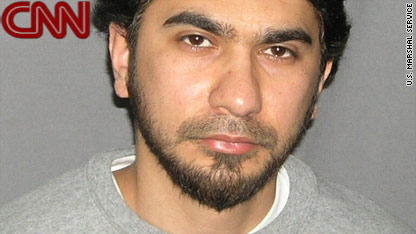 Faisal Shahzad was arrested in connection with an attempted bombing in Times Square.

[Updated at 10:51 a.m.] CNN's Susan Candiotti has obtained Faisal Shahzad's mugshot, which is the first new photo of the attempted Times Square bomber, since he was arrested for his association with the plot in Manhattan.

The photo was taken after Faisal Shahzad was formally placed in the custody of the U.S. Marshals on Wednesday. Heâ€™s shown wearing a grey sweatshirt â€” the same clothes he wore in court. Unlike earlier photos taken before he was arrested, he now has a slight beard.

12:01 am ET May 7, 2021 RETWEET
Seriously? â€œA controversial proposal to allow Texans to carry handguns in public without obtaining a license or tratwitter.com/i/web/status/1â€¦mswS
susancandiotti

11:33 pm ET May 6, 2021 RETWEET
Peloton is estimating its treadmill recall will cost the company about $165 million in lost revenue during the theâ€twitter.com/i/web/status/1â€¦Bt
cnni