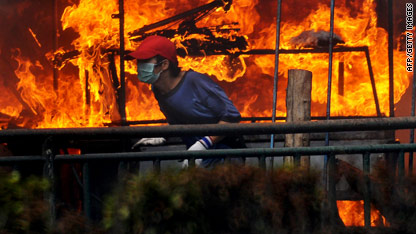 Midterm election primaries - Voters sent mixed signals in Tuesday's primaries in Arkansas, Pennsylvania and Kentucky. They tossed out a longtime senator, picked a Tea Party-backed candidate and forced a Democratic senator into a runoff.Â  CNN's political analysts give their take on what it all means and how it mayÂ affect midterm elections in November.

Democratic National Committee Chairman Tim Kaine will be talkingÂ Wednesday at the National Press Club in Washington about what he thinks the primaries meant and what he sees in the future for his party and its prospects in the 2010 elections.

Fight for second chance led to landmark decision - Mary Graham vividly remembers the day in 2006 when a Florida judge determined that her 17-year-old son was beyond redemption. The judge sentenced the teen, who was accused of committing a second armed robbery, to life in prison without the possibility of parole. On Monday, the Supreme Court gave Terrance Graham, now 23, a ray of hope. In a 6-3 decision, the high court ruled that life in prison without a chance of parole is cruel and unusual punishment for defendants under 18 who have not been convicted of murder. No other country punishes juveniles with life without parole sentences for cases where no one is killed, the court said in its majority opinion. CNN's Stephanie Chen reports.

5:37 am ET May 21, 2022 RETWEET
From alternative fuels to rationing trips: A guide to more sustainable flying âœˆcnn.it/3wCWMYJNlgZ
cnni

5:37 am ET May 21, 2022 RETWEET
From alternative fuels to rationing trips: A guide to more sustainable flying âœˆcnn.it/3wCWMYJNlgZ
cnni