The LeBron sweepstakes - a nationwide contest 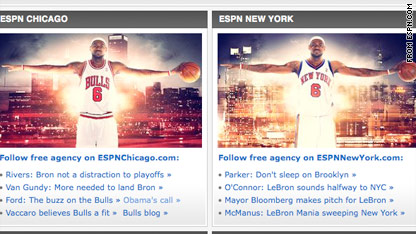 LeBron James is featured on ESPN in a Bulls and Knicks jersey -- further fueling the fire about his free agency.

Even though his Cleveland Cavaliers were eliminated from the NBA playoffs last week, LeBron James is the league's most talked about player right now because of his impending free agency. On July 1, any of the league's teams can try to woo the league's most valuable player to change uniforms with the promise of hundreds of millions of dollars and championship glory. Before then he can only talk officially to the Cavs, which hasn't stopped the rumor mill and sales campaigns from going full blast around the league.

If you just can't stand the wait, you can monitor exactly how many days minutes and seconds until things really get swinging on ESPN's LeBron tracker. That's right, a countdown to his free agency, that's how big this is going to be.

The quest to sign LeBron has practically become a sweepstakes - a contest who can woo the big star the best - with lobbying campaigns that could put Washington to shame and sales pitches farther over the top than Vince the Shamwow guy - all to convince King James they are the right choice.

"I want to win," he said after Cleveland's 94-85 loss in to the Boston Celtics Game 6 Thursday. "That's my only thing, that's my only concern. It's all about winning for me and I think the Cavs are committed to do that, but at the same time I'll give myself options. Me and my team, we have a game plan that we're going to execute, and we'll see where we'll be at."

When he talks about his team there, he means his inner business cabinet, and not his buddies on the bench at Quicken Loans Arena by Lake Erie.

Many sports analysts say the decision will come down to two things: whether James wants to go where he can win a title the soonest, which just might mean staying in Cleveland (which by league rules can offer him the most money), or a marketing move that would mean he can command the stage in a big market like New York or Chicago.

Some say the curtain on LeBron's time in Cleveland, just a short drive up I-77 from his Akron home, is likely to fall.

But Cleveland isn't giving up without a fight. Which is where the "We are LeBron" campaign begins. Many notable people in the city and in Ohio came together to create the video "Please Stay LeBron" –– a take on the 1980s charity video "We Are the World."

SI.com's Ian Thomsen said he believes James will leave the Cavaliers (he also breaks down what each team in the hunt has to offer) Where are the best bets on his destination? The New York Knicks, New Jersey Nets, Miami Heat and Chicago Bulls are the most talked about options, though many fans speculate the Bulls and Nets are the frontrunners.

And if you ask his high school basketball coach, the right choice for James is in Chicago right along Derrick Rose. It couldn't help for a man known as the King to stand in the shadow of Michael Jordan's footsteps right? And with ramblings about coaching options in Chicago, some have speculated that LeBron James could feasibly be choosing the coach he'd work with if he went to Chicago. And he's got President Obama, a Chicago native, rooting for that move too.

Not to be outdone, New York City Mayor Michael Bloomberg has done his own stumping, hoping James will make his way to the big stage in the Big Apple. Which is also where SI.com's Jeff Pearlman thinks he should go.

"If I were LeBron's father and he listened to me, I'd say, 'Son, go to New York'," Pearlman wrote, in discussing that the move is about more than just basketball.

ESPN may be throwing even more fire on the hot debate - showing photos of what James would look like in both a Bulls and a Knicks jersey on their localized sports sites.

But there still are other options - and some teams want to make sure they aren't forgotten in all the hoopla.

The long-suffering Los Angeles Clippers may not be getting the attention of the Bulls or the Knicks, but Clipper fans are hoping they can change all that with a "Bring LeBron to the L.A. Clippers" parade during game 5 of the Western Conference finals, according to the Los Angeles Times.

With all this pandering, passion, debating, hyping, begging and prodding we're still no closer to figure out where James may end up. But one thing is clear - he's in high demand - and in this case the rumor mill couldn't work anymore in his favor. And it's going to keep on going for a long time - as I write this - another 42 days, 10 hours, 14 minutes and 52 seconds.

3:31 pm ET May 13, 2021 RETWEET
Prince Harry says he wore a baseball cap pulled down over his eyes to avoid being recognized cnn.it/33G6yev
cnni

3:27 pm ET May 13, 2021 RETWEET
For decades, ExxonMobil has deployed Big Tobacco-like propaganda to downplay the gravity of the climate crisis, shi‚Ätwitter.com/i/web/status/1‚Ä¶EO
cnni

3:16 pm ET May 13, 2021 RETWEET
The ‚Äúnear threatened‚Äù species of whitespotted bamboo sharks now have 97 new members thanks to these scienticnn.it/3fdL6Tvy07a
cnni

3:00 pm ET May 13, 2021 RETWEET
Updated guidance from the US Centers for Disease Control and Prevention says people fully vaccinated against Covid-‚Ätwitter.com/i/web/status/1‚Ä¶sq
cnni