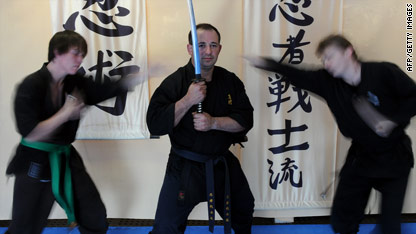 Sensei Kaylan Soto, middle, and his students came to the rescue of a German exchange student.

A group of would-be muggers in a Sydney, Australia, met their match Tuesday night in the form of black-clad ninjas.

The three stalked and attacked a German exchange student, 27, in a dimly lit alley that fortunately for the victim ran behind the Ninja Senshi Ryu warrior school, according to an Australian Broadcasting Corp. report.

Ninja student Nathan Smith was standing in the shadows outside the dojo when the attackers set upon the victim and quickly called for help from his classmates inside, according to a report in the Sydney Morning Herald.

"We looked around to see what was happening and there were three blokes on this guy just kicking him and punching him in the head," he told the ABC.

"We started running towards them and they took off. They would have seen five of us in ninja gear ... all in black with our belts on, running toward them.ŌĆØ

The ninjas gave chase but could not catch the assailants.

Police told the ABC they arrested two male suspects, ages 16 and 20, and are looking for a third. Their intended victim suffered only minor injuries.

Ninja Steve Ashley told the Herald the assailants must be lamenting their luck.

"It was probably the worst place in Sydney where they could have taken him,ŌĆØ he said.