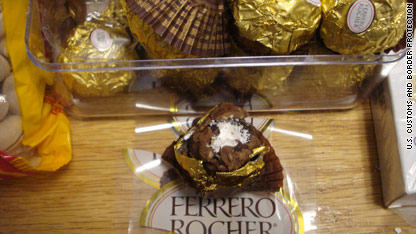 U.S. Customs and Border Protection stopped Lopera, a U.S. citizen, as he was trying to enter the country from Medellin, Colombia.

Lopera was selected for a baggage check, whereupon he handed over a suitcase and duffel bag.

According the to the complaint filed in the Eastern District of New York federal court, a customs officer found a gift package in the suitcase containing several boxes of chocolates and bags of pistachios. The bag seemed a little heavy for only candies and nuts.

Instead of their usual fate of being devoured, officials say, the Ferrero Rocher chocolates were poked and prodded until it was determined that they were filled with cocaine, as were the pistachio shells. Had these treats reached the streets, they could have brought close to $500,000.

Customs and Border Protection and Immigration and Customs Enforcement are continuing to investigate the drugs' intended destination.

Lopera has been charged with illegal importation of cocaine and awaits federal prosecution.