Prosecutors have recommended against charging Florida Rep. Matt Gaetz in a sex-trafficking investigation, a sourceãtwitter.com/i/web/status/1ãÎii 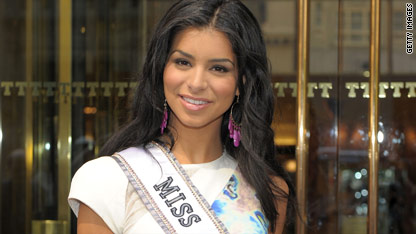 Fakih, 24, was born in Lebanon, but her family moved to New York when she was 7 years old. She later moved to Michigan, where she went to college.

The rarity of a woman born in the Middle East representing the United States in the Miss Universe pageant spurred internet buzz. One rumor was that Fakih had family connections to Hezbollah, a Lebanese Shiite group that the U.S. designates as a terrorist organization.

"Absolutely not," Fakih told CNN's Octavia Nasr. "That is a stereotype and a prejudiced statement made by only one reporter who had made that title before I was crowned Miss USA."

The blogger's accusation "was completely made up out of her own prejudiced mind," she said.

Contrary to some reports, she said, her family did not live in Southern Lebanon, the hub of Hezbollah.

"We lived in the mountain area of Lebanon, which is predominantly Christian-based," she said. "The majority of my family is diverse. It's Muslim and Christian."

Fakih said religion should not be a question for Miss USA winners.

"Religion does not identify me, I would like to say that," she said. "My family is more of a spiritual family rather than religious. We've never been religious, we've been never known to be religious, and on top of everything, we celebrate Christmas."

"We are Muslim," she said. "However, we appreciate and admire all faiths."

The reaction to Fakih's selection was cause for celebration for many in Lebanon, a country she visited just a few months ago.

"I want them to know that the United States is not what they see on TV," she said. "It is still a country of freedom and opportunity."

Fakih said she has been invited to visit Lebanon and meet with leaders there, including President Michel Suleiman.

2:00 am ET September 26, 2022 RETWEET
What should you do when forecasters say there is a hurricane headed your way? There are many steps you can take toãtwitter.com/i/web/status/1ãÎ09
cnni

2:00 am ET September 26, 2022 RETWEET
What should you do when forecasters say there is a hurricane headed your way? There are many steps you can take toãtwitter.com/i/web/status/1ãÎ09
cnni