Facebook announces a new corporate name, part of a rebranding and shift in strategy after intense criticism of theā€twitter.com/i/web/status/1ā€¦bq

Families of the nine people killed in the Charleston church massacre reached a settlement with the US government ovā€twitter.com/i/web/status/1ā€¦uH

Watch live: President Biden addresses the nation after meeting with Democrats over a pared-down version of his $1.7ā€twitter.com/i/web/status/1ā€¦ED

The US economy grew at an annualized rate of 2% in the third quarter, far lower than what economists predicted, asā€twitter.com/i/web/status/1ā€¦UW

President Biden will present the framework of his $1.75T economic and climate package to Democrats as his major domā€twitter.com/i/web/status/1ā€¦57 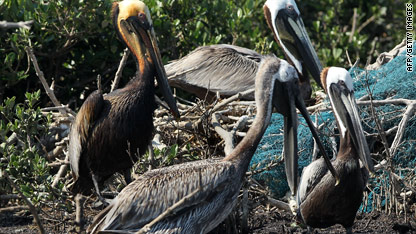 An oil-stained pelican with his cleaner friends Monday.

Washington pressures BP: Politicians ramped up their tough talk to BP about capping the massive oil spill estimated to be spewing at least 5,000 barrels of crude a day into the Gulf of Mexico. The Web was afire with the back and forth.

The federal government could take over the effort from BP, acknowledgedĀ Doug Suttles, BP's chief operating officer. He said the company is as frustrated as everyone elseĀ that its numerous attemptsĀ to stop the spill have failed. But Louisiana officialsĀ told BP that it betterĀ move quicker, or else.Ā Gov. Bobby Jindal said the coastline had been "oiled" and he would mobilize state resourcesĀ soon if the spill isn't capped.

On Wednesday, BP will attempt a "top kill,"Ā which involvesĀ pumping thick, viscous fluid twice the density of water into the site of the leak so the well can then be sealed with cement. If that doesn't do the trick, BP said that it has more ideas.

South Korea-U.S.Ā partnership: "Korea" remained the top search on Google for several hours Monday. The PentagonĀ said that the U.S. military will conduct joint exercises with the South Korean military, a responseĀ to South Korea'sĀ announcement that North Korea was behind the sinking of one of its warships, the Pentagon said Monday. The U.S. and South Korea will conduct anti-submarine exercises and well as maritime exercises. The New York Times publishedĀ an in-depth look at the issue.

Lindsay in court: A Los Angeles County Superior Court judgeĀ told Lindsay Lohan that she'll have to adhere to new bail restrictions. At a hearing Monday, Judge Marsha Revel told the actress she will have to wear aĀ bracelet thatĀ detects alcohol. The starlet was also ordered not to drink, and she will face random weekly drug testing.

Lohan's lawyer said her 23-year-old client is scheduled to film a movie in Texas. The judge responded by saying that the testing must be done in California. Lohan's face showed visible stress after Revel ordered her to stay in the L.A. area until a probation revocation hearingĀ  July 6 so she can submit to random drug tests.

In other highly searched Hollywood news, the Los Angeles police saidĀ that the death of Brittany Murphy's husband was natural, Britney Spears out-tweeted Ashton Kutcher, and everyone was "Lost" in those commercials.

A misdemeanor complaint alleging a sex crime has been filed against former New York Gov. Andrew Cuomo, who resignedā€twitter.com/i/web/status/1ā€¦WZ
cnni

5:01 pm ET October 28, 2021 RETWEET
Native groups and advocates are demanding that the Atlanta Braves eliminate the "Tomahawk chop" from its branding aā€twitter.com/i/web/status/1ā€¦qU
cnni

4:36 pm ET October 28, 2021 RETWEET
A senior US general says China is developing capabilities at a "stunning" pace and calls on the US and its allies tā€twitter.com/i/web/status/1ā€¦Qi
cnni