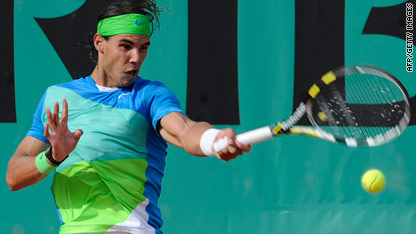 The NBA playoffs have been full of sweeps and blowouts. But could we actually have a series on our hands? SI.com’s Chris Ballard says the Suns planted a seed of possibility in cutting the Lakers’ lead to 2-1 but can they pull out another win in Phoenix and even up the Western Conference finals (9 p.m., TNT)? It’s worth noting that only 14 teams in NBA history have come back from a 2-0 deficit to win the series.

The NBA playoffs, French Open, baseball and soccer are all on today’s sports docket. Here are a few can’t-miss events (all times Eastern).

French Open (5 a.m. to noon, Tennis Channel, noon-6:30 p.m., ESPN2). First-round play continues with Rafael Nadal, a four-time winner, Roland Garros and Andy Roddick in action on the men’s side, while Dinara Safina and Maria Sharapova both open up play on the women’s side.

Red Sox at Rays (7:10 p.m., NESN, Sun Sports). Boston may still be in fourth place in the AL East, trailing Tampa Bay by 7 games in the standings, but it delivered a statement with a 6-1 win to open their series Monday. The Red Sox, who have won six of their last seven games, will try to eat into the Rays’ lead as the series continues with Jon Lester on the mound.

USA-Czech Republic (8 p.m., ESPN, Galavision.) This is more than just a chance to stay sharp for the Americans; it’s the last chance for a number of fringe players to impressive coach Bob Bradley heading into next month’s World Cup, says SI.com’s Grant Wahl, who breaks down the players on the bubble.

84: Combined years the Stanley Cup finals participants have gone without a title. The Blackhawks last won in 1961, while the Flyers haven’t hoisted the Cup since winning consecutive championships in 1974-75.

.663. The Cleveland Cavaliers fired coach Mike Brown, who has the highest winning percentage in franchise history. So why did they hand Brown his walking papers? SI.com’s Frank Hughes has the answer.

20 1/3. Heralded Washington Nationals pitching prospect Stephen Strasburg saw his scoreless streak at the minors’ highest level end as he gave up five hits and two runs, one earned, vs. the Triple-A Toledo Mud Hens. In 45 1/3 innings in eight starts, Strasburg has an overall era of 0.99.