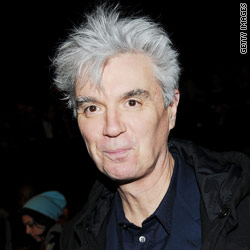 The songwriter, artist and former Talking Heads band member is suing Florida Gov. Charlie Crist for using the song "Road to Nowhere" in an online campaign ad without permission.

Bloomberg reports that Byrne said that he never licensed a song to be used in an advertisement and is seeking $1 million in damages.

"I'm a bit of a throwback that way, as I still believe songs occasionally mean something to people," Byrne said in a statement. "A personal and social meaning is diluted when that same song is used to sell a product or a politician."

Crist, once a Republican, is now running as an independent for U.S. Senate.

The Republican congressman from Louisiana says he is concerned about the desperate situation facing the Gulf fishing industry. WGNO TV reports that Cao and organizations like Volunteers of America are working to bring mental health workers to the area to help.

"I spoke to a group of fishermen, mainly Vietnamese-Americans, and a group of them came up to me and said, they told me that they contemplated suicide because they're in such despair," Cao said.

He says fishermen are feeling added stress on top of post-Katrina troubles.

"For some people, this is almost a boiling point where they can no longer handle it and they're going to crack."

Cao is the first Vietnamese-American, as well as the first native of Vietnam, elected to Congress.

Papp, who replaces Adm. Thad W. Allen, previously served from July 2008 to April 2010 as commander, Coast Guard Atlantic Area, where he was the operational commander for all U.S. Coast Guard missions within the eastern half of the world. He also was commander of a unit during Operation Able Manner off the coast of Haiti in 1994, enforcing United Nations sanctions.

The Forensic Services Unit supervisor of the National Center for Missing and Exploited Children never gives up.

On Monday, Nance told CNN, "I am here to say to the parents of missing children: We will never stop searching for your child, even when most have given up hope. Even when somebody has been convicted of the crime. We will not stop until we find them."

He said, "I have 800 unidentified and missing children in my files, cases that go back to the 1940s."

Tuesday will mark the 27th National Missing Children's Day. First proclaimed by President Ronald Reagan and observed by every administration since, May 25 is the anniversary of the day in 1979 when 6-year-old Etan Patz disappeared from a New York City street corner on his way to school.

The South Carolina gubernatorial candidate is forcefully denying a claim that she once had an extramarital affair with a prominent South Carolina political blogger.

Will Folks, the editor of what many consider the state's most influential political news website, wrote Monday that he had an "an inappropriate physical relationship" with Haley, who is married with two children, several years ago.

"I have been 100 percent faithful to my husband throughout our 13 years of marriage," Haley said in a statement issued by her campaign. "This claim against me is categorically and totally false."

The charge came just days after some polls indicated Haley vaulting to the front of the four-way Republican primary race. Sarah Palin has advised Haley to "hang in there."

CNN Political Ticker: Palin to Haley: 'Hang in there'

A group of archaeologists has found the largest ancient city ever discovered in Egypt, dating back 3,000 yearsâ€twitter.com/i/web/status/1â€¦eQ
cnni

7:01 am ET April 17, 2021 RETWEET
Surigae continues to strengthen, becoming the first super typhoon of the season and will make a close pass to the Pâ€twitter.com/i/web/status/1â€¦zD
CNNweather