At least one person was killed and 33 injured in a powerful explosion in the northeastern Chinese city of Shenyang,‚Ätwitter.com/i/web/status/1‚Ä¶Nk

An Italian DJ claims he suffered a number of injuries following an alleged altercation with MMA fighter Conor McGre‚Ätwitter.com/i/web/status/1‚Ä¶Ci

A drone attack targeted US troops at a US base in Syria, a defense official says. Initial assessment suggests no US‚Ätwitter.com/i/web/status/1‚Ä¶3v

Medical examiner called in after items belonging to Brian Laundrie, the missing fianc√© of Gabby Petito, found in Fl‚twitter.com/i/web/status/1‚Ä¶1tM 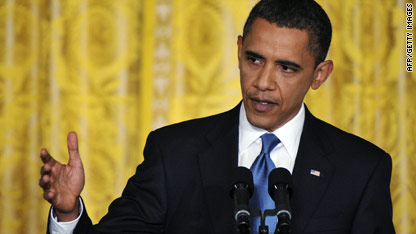 [Updated at 1:57 p.m.] The president answers the last question from the media and ends the news conference.

[Updated at 1:56 p.m.] Obama says anyone looking for someone to take responsibility can look to him because it's his job to end the crisis. He said the situation "forces us all to do some soul-searching, and I think that's important for all of us to do."

[Updated at 1:51 p.m.] Asked about Interior Secretary Ken Salazar saying the administration had its "boot" on BP's "neck," Obama responded that Salazar is "frustrated, angry and emotional," but that it's important to focus on actions not anger.

[Updated at 1:44 p.m.] "It's problem if we don't start changing how we operate," Obama says, emphasizing the need for diverse sources of energy and explaining how he approached the GOP caucus and said, "Let's work together" on a bipartisan framework for addressing the nation's energy needs.

[Updated at 1:40 p.m.] "We have to verify whatever they say about the damage," Obama says, adding that the government has fallen short in checking out BP's information on the extent of the catastrophe.

[Updated at 1:38 p.m.] Asked if he regretted calling for expanded offshore drilling as part of the nation's energy strategy, Obama says he made the mistake of believing that oil companies "had their act together" when it came to assessing worst-case scenarios.

[Updated at 1:37 p.m.] Despite the oil spill, Obama says he continues to believe that "domestic oil production is an important part of our overall energy mix," but it is insufficient to meet the nation's future needs on its own.

[Updated at 1:33 p.m.] Prior to the oil spill, "there was lack of anticipating" what the worst-case scenarios could be, the president says, and "that's a problem."

[Updated at 1:31 p.m.] The president says he takes some responsibility for not moving quickly enough to change a culture at the Minerals Management Service in which "oil companies were able to get what they wanted." He added, "We should've busted through those constraints."

[Updated at 1:26 p.m.] Prior to the Obama administration, there was a "habit" of signing off on environmental waivers because the Minerals Management Service couldn't complete the necessary studies within the allotted 30 days, the president says.

[Updated at 1:23 p.m.] Obama will "leave it" to the media to compare his oil spill response to former President George W. Bush's response to Hurricane Katrina: "I'm confident that people [will say] this administration was on top of what was an unprecedented crisis."

[Updated at 1:22 p.m.] The president asserts that if "BP's contractors are not moving as nimbly or effectively as they need to be, then it is already the power of the federal government to redirect those resources."

[Updated at 1:20 p.m.] Obama says, "This is a big mess coming to shore," and even with a perfect organizational structure, "spots are going to be missed."

[Updated at 1: 18 p.m.] BP has emergency contracts on hand in the event of an oil spill, Obama says, and "their job is to activate those and start paying them."

[Updated 1:15 p.m.] The federal government does not have "superior" technology, compared to that of BP, to help cap the broken oil well in the Gulf of Mexico, the president says.

[Updated 1:13 p.m.] Obama says the federal government has been involved in decision-making since Day One of the crisis: "This notion that somehow the federal government is sitting on the sideline for the last three or four or five weeks, we've just been letting BP make a whole bunch of decisions, is simply not true."

[Updated at 1:10 p.m.] "Those who think we were slow" in responding to the Gulf oil spill "don't know the facts," the president says.

[Updated at 1:08 p.m.] The president says the oil spill is a reminder of the need to push for comprehensive energy reform legislation.

[Updated at 1:06 p.m.] The crisis has been "the highest priority" since it began, and Obama says he has had more meetings about the spill than any other matter besides the Afghan troop buildup.

[Updated at 1:02 p.m.] Obama lists four actions the administration is taking: suspending exploration in two sites off Alaska, canceling plans for leases off the coast of Virginia and in the Gulf of Mexico, suspending permits for new deep-water wells in the Gulf for six months and suspending¬Ý 33 current projects in the Gulf.

[Updated at 12:57 p.m.] White House has insisted that BP pay injury claims, Obama says, adding that the U.S. is "not going to abandon our fellow citizens."

[Updated at 12:55 p.m.] Obama, speaking at a White House news conference, says BP is operating under government supervision and must consult administration before undertaking any measures.

Record-breaking rains and heavy flooding have killed at least 150 people in India and Nepal this week, according to‚Ätwitter.com/i/web/status/1‚Ä¶Br
CNNweather

7:13 am ET October 21, 2021 RETWEET
As India celebrated passing the milestone on Thursday, some experts warned the pandemic threat was not over -- in a‚Ätwitter.com/i/web/status/1‚Ä¶SM
cnni

7:00 am ET October 21, 2021 RETWEET
.@JohnKingCNN revealed that he has multiple sclerosis and stressed how important being vaccinated is to help protec‚Ätwitter.com/i/web/status/1‚Ä¶dV
cnni