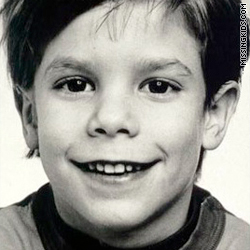 His was the first face of a missing child to appear on the back of a milk carton. Now, nearly 31 years to the day since Etan vanished from a New York street, authorities are reopening his case.

The communications director for Manhattan District Attorney Cyrus Vance Jr. confirmed the office is taking another look at the decades-old mystery.

Etan was 6 when he disappeared on the morning of May 25, 1979. "It was the first day that he was to walk two blocks from his apartment to the school bus stop," said Lisa R. Cohen, author of "After Etan: The Missing Child Case That Held America Captive."

Cohen said, "He had been wanting to do it by himself, and they gave him permission, literally two short blocks."

Jose Antonio Ramos, a convicted child molester, has been identified as a suspect in the disappearance, but has never been charged in connection with the case.

According to Cohen, Ramos initially told investigators that he was "90 percent sure" that a boy he had taken home on that day in 1979 was Etan.

Ramos has since denied making that statement, she said.

The Louisiana attorney lost his son in the Deepwater Horizon oil rig explosion, and he doesn't want the world to forget¬Ýall 11 men who died during the April 20 disaster.

Gordon Lewis Jones, 28, was an offshore oil rig mud engineer from Baton Rouge. He is survived by a wife and two sons, one of whom was born less than two weeks ago.

Keith Jones is among the witnesses scheduled to testify at a House Judiciary Committee hearing Thursday on the legal liability issues resulting from the explosion.

Jones told 2theadvocate.com, "I am certain that BP will be forced to fairly compensate those who will lose, for a time, their livelihoods."

Jones added, "In other words, Louisiana will come back from this oil spill. But Gordon will never come back, and neither will the other 10 men who died with him."

The anti-tax champion and former GOP member of the Nevada Assembly is gaining strength and endorsements in her bid to win Nevada's Republican Senate nomination and take on the presumptive Democratic nominee, Senate Majority Leader Harry Reid.

Angle recently won the backing of the fiscally conservative Club for Growth.

She is among a dozen Republican candidates battling for their party's nomination, including former Nevada GOP Party Chairwoman Sue Lowden and businessman and former University of Nevada, Las Vegas basketball star Danny Tarkanian.

Nevada's primary is June 8. The Las Vegas Sun reports Thursday that Angle has had to defend her support of a prison program that her opponents linked to Scientology.

The two National Guard officers from Maine will finish their 550-mile, "marathon per day" run this Friday at Arlington National Cemetery in Virginia .

Mosher and Brock began on May 8 in Kittery, Maine, and have each run 13.1 miles a day for 21 days - their version of a 21-gun salute to those no longer alive to run with them.

The Army Times reports that Mosher had a difficult time when he returned from Afghanistan in 2004.

He said, "I could not figure out why I was so angry, why my marriage failed, why I wanted to go back. I felt I had more peace when I was in Afghanistan."

So Mosher and Brock came up with the Resiliency Run. They say they believe that staying fit creates physical, mental, emotional and spiritual health and is part of their duty to the country.

The Vietnam veteran and 1969 graduate of Walpole High School in Massachusetts says he sees nothing wrong with flying the Confederate flag on his private property.

The Walpole school board voted in 1994 to do away with the divisive symbol. But CNN affiliate WHDH-TV in Boston reports that Finneran's property is right next to the school's football field.

Despite opposition in the town, Finneran - who played football on the school team that is still called the Rebels - wants the flag to stay.

"It's a whole lot of horse manure. If it bothers some people, too bad," he said. "Only I and the Almighty know if there's an evil in my heart. As long as I'm OK with him, let everybody else take a hike."

Health officials in the United Kingdom are advising parents and schools to watch for Strep A infections following t‚Ätwitter.com/i/web/status/1‚Ä¶Jw
cnni

6:02 pm ET December 2, 2022 RETWEET
Brazilian football legend Pel√© is being treated for a ‚Äúrespiratory infection,‚Äù according to a statement by the Atwitter.com/i/web/status/1‚Ä¶FknLnHu
cnni