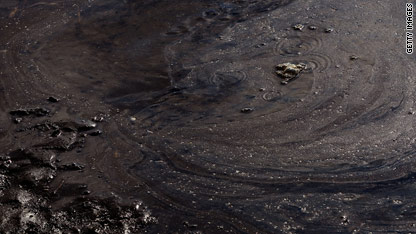 - Hayward said it will be 48 hours before any conclusions can be drawn about the operation's success. "I know that is frustrating for everyone," he said. "I want to get this over with as soon as we possibly can. We are doing everything we can to achieve that."

- Hayward, who had previously said the environmental impact of the Gulf of Mexico oil spill would be modest, upgraded his assessment Friday to an "environmental catastrophe."

- Even if BP were to successfully plug the well this weekend, the Gulf oil spill is still the largest in U.S. history. Government scientists said Thursday that as many as 19,000 barrels (798,000 gallons) of oil were spewing into the ocean every day, making this disaster perhaps twice the size of the Exxon Valdez incident.

- Seven oil spill recovery workers who were hospitalized in New Orleans after complaining of feeling ill were properly trained and had protective gear on, according to the federal on-scene coordinator for the oil spill response effort in the Gulf of Mexico.

- BP says it has provided spill recovery workers with protective equipment, such as suits, steel-toed boots, gloves, hard hats and safety glasses. In addition, BP said, workers are conducting about 250 air-quality tests a day. They also are testing workers for exposure to irritants and other substances that could be harmful, BP said.

- Images from the massive BP oil spill have prompted many tourists to bolt to other destinations this Memorial Day weekend.

- Hotels in Florida, Alabama and Mississippi are using everything from "beach cams" and money-back guarantees to constant updates on their Web sites to get the word out that their beaches are clean and open for business.

- In Louisiana, hotels catering to sport fishermen are seeing a falloff in bookings, but that's been offset by the masses of recovery workers, BP employees and journalists who have poured into the area.

- Oil prices rose for the third day in a row Friday, as traders anticipate a 6-month moratorium on new offshore drilling permits and other responses to the Gulf oil spill could mean supply decreases in the long-term.