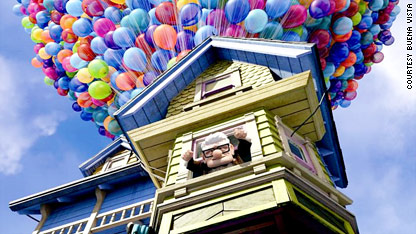 Remember "UP," the Pixar movie in which good ol’ cranky Carl hooks 20,000 helium-filled balloons to his house and floats away to South America?

It’s not as impossible as it looks.

American adventurer Jonathan R. Trappe strapped himself to a wicker chair – sans house – that was strung with 55 multicolored “chloroprene cloudbuster” balloons and successfully floated himself across the English Channel Friday morning.

Snipping off one eight-foot helium filled balloon at a time, Trappe, descended into a field in Dunkirk, northern France, after more than three hours in the air, according the UK’s Times newspaper.

Sure, he might not have flown as far – and possibly as high – as Carl, but Trappe’s latest trip is said to have made history: It’s the first successful cluster balloon flight over the 22-mile ribbon of water between U.K. and France.

Describing the trip the 36-year-old told SkyNews: “It was tremendously peaceful, tremendously beautiful… it was just an exceptionally quiet, peaceful experience.”

“Isn’t it everyone’s dream?” he said. “Grabbing on to toy balloons and flying off into open space?”

But not everyone can attempt such a feat. Trappe is FAA certified pilot with two dozen flights under his belt.

The only way to land in a cluster balloon flight is to cut off one balloon at a time and fine tune the descent by jettisoning water ballast. Trappe’s seat pod was packed with a location device and communication equipment.

The balloons he adds “represent dreams... the uncommon, the unusual, the unlikely the impossible but true.”

The sport of cluster ballooning began in 1982 when Larry Walters flew across San Diego in a homemade craft reaching heights of 15,000 feet.