Web Pulse: A sinkhole, the Gores split and flotilla fallout 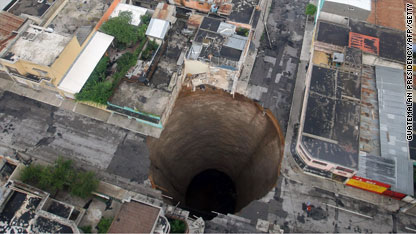 A sinkhole in Guatemala City.

A big, scary hole - A frightening image appeared on the photo sharing site Flickr.com of a sinkhole in Guatemala City that several on Twitter are calling the sinkhole to "hell." Tropical Storm Agatha drenched the region, resulting in the deaths of nearly 150 people in Guatemala, Honduras and El Salvador. In Guatemala alone, 90 people are missing, officials said. The country is suffering even more because the Pacaya volcano, which erupted Thursday night, has continued to spew ash. Three people were killed when they were crushed by rocks strewn by the volcano.

Splitsville for the Gores - A representative for Tipper and Al Gore confirmed that the couple sent an e-mail announcing they were separating. They have been married for 40 years. It seems the public began trying to search online for the e-mail, or at least parts of it, by taking chunks of it that have been reported and running the lines through Google. The passage that has been reported: "This is very much a mutual and mutually supportive decision that we have made together, following a process of long and careful consideration."

Flotilla fallout - The world is trying to keep up with the fast-moving story about the Israeli raid on an aid flotilla into Gaza that resulted in at least nine deaths. Protests were staged around the globe, from New York to Turkey, against Israel's actions, and the United Nations condemned the raid. Diplomatic sources told CNN that of the 600 who are being held by Israel, citizens of Arab countries, except Egypt, were being prepared for release early Tuesday afternoon. Egyptians will be moved to the Jordanian border for deportation, an Arab and an Israeli source said. Meanwhile, more witness accounts have surfaced.