[Updated at 10:06 p.m.] Here are the latest developments on the oil spill in the Gulf of Mexico, which began when the oil rig Deepwater Horizon exploded on April 20:

- BP announced Wednesday that it supports the federal government's decision to proceed with the construction of six sections of the Louisiana barrier islands proposal and will fund the estimated $360 million construction cost.

- The head of Mexico's Department of the Environment and Natural Resources in Mexico says five states in Mexico are monitoring the oil spill in the event it reaches land in the country, according to state-run news agency Notimex.

- BP abandoned use of the diamond wire cutter to slice off the damaged riser pipe after it got stuck. Though the cutter was ultimately dislodged, BP's next move will be to use the cutting device that made Tuesday's cut through the riser.

- Because the cutter will not produce a smooth cut, BP will attempt to collect the spurting oil with the "top hat" instead of the Lower Marine Riser Package.

END_OF_DOCUMENT_TOKEN_TO_BE_REPLACED

BP frees snared cutter from damaged pipe: BP was able to free a snared cutter Wednesday that had stalled attempt to cap undersea gusher responsible for massive oil spill in the Gulf of Mexico.

Robots succeed, cut well pipe: A new flow of oil emerged from BP's damaged undersea well in the Gulf of Mexico on Tuesday evening after a remote-controlled submarine successfully cut into the well's riser pipe.

12 die in UK shooting spree: At least 12 people have been killed and 25 injured after a gunman - believed to be a local taxi driver - went on a shooting spree through three small towns in English county of Cumbria Wednesday.

Public wants Obama to get loud: With oil still gushing in what is now the worst spill in U.S. history and environmental devastation coming ashore, President Obama becomes target of anger originally directed only at BP.

A day with Coast Guard Adm. Thad Allen and the oil spill

Click to watch video
Adm. Thad Allen has been called many things: Sir, commandant, TA, fearless leader and now, the latest headline in print calls him a â€śrock star.â€ť

He laughs, but when it comes time for â€śdown time,â€ť itâ€™s music that calms his mind.

â€śI am very careful who rents space in my head,â€ť he tells me as I ask whether all the criticism over this oil disaster in the GulfÂ  gets to him.

END_OF_DOCUMENT_TOKEN_TO_BE_REPLACED

A Nevada man was sentenced to death Wednesday by a jury in Reno for raping and murdering college student Brianna Denison. Read the full CNN.com story

A Washoe County jury convicted James Michael Biela last weekÂ of first-degree murder and sexual assault in the 19-year-old's death. He was also convicted of two counts of sexual assault for attacks on two other women and one count of kidnapping related to one of those attacks.

Denison, a sophomore at Santa Barbara City College in California, was visiting her hometown of Reno when she disappeared from a friend's couch on January 20, 2008. Three weeks later, her body was found in a field near her friend's home. She had been sexually assaulted and strangled.

The White House has ordered BP to fund Louisiana's plan to dredge up walls of sand along its coast to head off the massive Gulf of Mexico oil spill, Louisiana Gov. Bobby Jindal announced Wednesday. Read the full CNN.com story 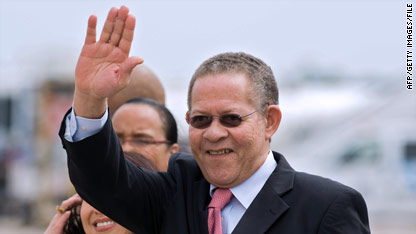 Jamaica's Prime Minister Bruce Golding survived a no-confidence vote after he was indirectly blamed for the outbreak of violence in Kingston.

Jamaica plans to bring in relatives and friends Wednesday to identify those killed in the operation to arrest accused drug lord Christopher Coke, the ministry of national security said.

The identification process, which began at 9:30 a.m., came hours after Prime Minister Bruce Golding survived a no-confidence vote in parliament. Jamaicaâ€™s opposition Peopleâ€™s National Party accused Golding of being indirectly responsible for the deaths and the outbreak of violence in West Kingston.

In the motion of no-confidence, parliament member Peter Phillips accused Golding of partaking in a â€śdamnable coverup,â€ť actively fighting to protect Coke and allowing organized crime to insert itself into Jamaicaâ€™s politics.

â€śMr. Speaker,â€ť Phillips said, â€śit is with a sense of personal disappointment that one of the authors of this whole sordid chapter was none other than the prime minister himself.â€ť

The motion was rejected along party lines Tuesday night, according to Jamaican news outlets, with Goldingâ€™s Labor Party trumping the measure 30-28.

END_OF_DOCUMENT_TOKEN_TO_BE_REPLACED

Torrential rain and hurricane force winds were forecast for the eastern coast of Oman as Cyclone Phet, a Category 4 storm with maximum sustained winds of 145 mph and gusts up to 170 mph bore down on the sultanateâ€™s coast Wednesday.

END_OF_DOCUMENT_TOKEN_TO_BE_REPLACED 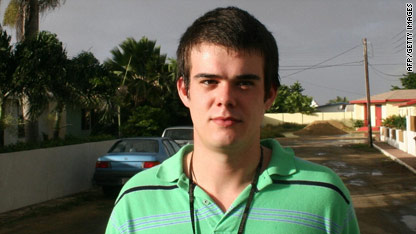 Joran van der Sloot, the Dutch man once considered a suspect in the 2005 disappearance of Alabama teenager Natalee Holloway, is the suspect in the killing of a woman in Peru, Peruvian police officials said Wednesday.

END_OF_DOCUMENT_TOKEN_TO_BE_REPLACED

Speaking defiantly in the face of worldwide criticism, Israeli Prime Minister Benjamin Netanyahu defended the Israeli commando raid on the aid-bound vessels for Gaza, saying the troops acted properly in the bloody raid.

END_OF_DOCUMENT_TOKEN_TO_BE_REPLACED 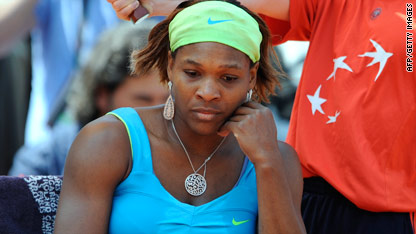 A frustrated Serena Williams looks out onto the court after she lost to Australian Samantha Stosur.

Another day at the French Open and another upset. On Wednesday it was goodbye for Serena Williams.

The top-seeded Williams sister was knocked out of the French Open Wednesday in the quarterfinals (6-2, 6-7 (2), 8-6.) by Australian Samantha Stosur who has played the part of spoiler this week. Stosur knocked out four-time champ Justine Henin, ending Henin's Roland Garros winning streak at 24 matches.

Sports Illustrated senior writer S.L. Price called Stosur's upset the most "impressive women's feat of year," noting that Williams is the number one player in the world, the "best fighter on the tour" and has already won the Australian Open.

"It's not as devastating a loss historically as Roger Federer's was yesterday," Price said. "But it won't be a pleasant night in the Williams family household."

[Updated at 9:14 a.m.] Police have found the body of a man believed to be Derrick Bird, the suspect in a number of shootings, some fatal, across the West Cumbria region of England, authorities said Wednesday.

Bird, 52, was believed to have fired shots in three towns near the coast of the Irish Sea on Wednesday, Cumbria police said.

Authorities said they had located a body believed to be Bird in a wooded area near Boot.

"Police have seized a gun from the scene and are now working to formally confirm the identity of the deceased and the number of people injured or dead," Cumbria police said.

END_OF_DOCUMENT_TOKEN_TO_BE_REPLACED

Israel has attempted to deliver humanitarian aid from an international flotilla to Gaza, but Hamas - which controls the territory - has refused to accept the cargo, the Israel Defense Forces said Wednesday.

END_OF_DOCUMENT_TOKEN_TO_BE_REPLACED

Former Alaska Gov. Sarah Palin is using the Gulf Coast oil spill to promote the issue of drilling in the Alaskan Wildlife National Refuge - the 20-million protected acres where untapped oil and gas reserves have long served as a lightning rod of controversy.

END_OF_DOCUMENT_TOKEN_TO_BE_REPLACED

[Updated 10:57 a.m.] Here are the latest developments involving the pre-dawn Monday raid by Israeli military on a flotilla of six ships carrying aid for the Palestinian territory of Gaza:

- An Israeli Cabinet member said Israel warned Turkey repeatedly that the Gaza-bound aid flotilla would need to land at Israel's Ashdod port so the material could be checked before the supplies were sent to Gaza.

"Nobody wanted to listen," Minister of Welfare and Social Services Isaac Herzog told CNN on Wednesday.

- The foreign flotilla detainees held at Beer Sheva prison are headed home, the Israel Prisons Authority said Wednesday. All the detainees have left the facility and were on their way to Ben Gurion Airport in Tel Aviv as of Wednesday afternoon.

- Four Israeli Arabs on the Gaza aid flotilla remained in Israeli custody Wednesday, according to Israeli sources and the Free Gaza Movement. A court ordered them held until next week.

- The Rachel Corrie, a ship with aid bound for Gaza, is 100 miles south of Crete and is planning to arrive in Gaza late Friday or early Saturday, according to the Free Gaza Movement.

- The European Campaign to End Siege on Gaza announced that it had already obtained the funding of the first three ships of the new fleet which will go to Gaza.

END_OF_DOCUMENT_TOKEN_TO_BE_REPLACED

A child in eastern Ohio died Wednesday in a school bus wreck that injured the driver and several other children, a school official said.

END_OF_DOCUMENT_TOKEN_TO_BE_REPLACED

Gulf oil spill –– BP early Wednesday used robot submarines and a complex maneuver in an attempt to stop the massive flow of crude oil spilling into the Gulf of Mexico. The company appeared to be making its second cut into the undersea well's riser pipe, the initial steps toward placing a cap over the well that has spewed hundreds of thousands of gallons of oil into the Gulf of Mexico every day since late April.

comes as oil from the rig explosion has spread and has been spotted on an Alabama beach. As the oil slick grows, so, too, does the outrage. CNN's Ed Hornick will take a look at how much the government can to do to watch over the oil company, and whether the government needs to take a larger role in managing enterprises such as Â deepwater drilling, where a companyâ€™s mistake could lead to adverse impacts on the rest of the world.

Gaza aid flotilla raid - Israel is facing an onslaught of intense international criticism as it continues to release activists detained after Monday's commando raid on an aid flotilla bound for Gaza in defiance of a blockade. At the same time we are beginning to hear more of the firsthand accounts from witnesses who were aboard several boats stormed by Israeli forces. We'll continue to provide you with the latest updates on the story as we get them. END_OF_DOCUMENT_TOKEN_TO_BE_REPLACED

BP early Wednesday used robot submarines and a complex maneuver in an attempt to stop the massive flow of crude oil spilling into the Gulf of Mexico.

END_OF_DOCUMENT_TOKEN_TO_BE_REPLACED 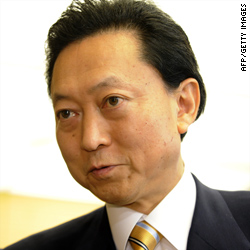 The Japanese Prime Minister announced Wednesday he will resign after eight months in power.

Eight months ago, Hatoyama's Democratic Party of Japan won a sweeping victory, an outcome hailed by many as a revolution in Japanese politics.

In his first speech as Japan's 92nd prime minister, Hatoyama made promises that he would conduct a clean and transparent government, launching a task force to monitor government spending. But soon afterward, allegations of illegal campaign financing tarnished his administration's image.

Some of his cabinet members were investigated for corruption. Hatoyama also backtracked on a campaign promise to move a U.S. Marine base off the southern island of Okinawa.

END_OF_DOCUMENT_TOKEN_TO_BE_REPLACED

An increasing proportion of female elephants in Mozambique's Gorongosa National Park have been born without tusks.â€twitter.com/i/web/status/1â€¦hV
cnni

4:23 am ET October 23, 2021 RETWEET
Luxembourg is set to become the first European nation to legalize the growing and use of cannabis, the government aâ€twitter.com/i/web/status/1â€¦6o
cnni

3:51 am ET October 23, 2021 RETWEET
Unthinkable during the height of the Covid-19 pandemic, an epic new cruise spanning all seven continents, lasting nâ€twitter.com/i/web/status/1â€¦D1
cnni

3:16 am ET October 23, 2021 RETWEET
To the surprise of researchers and sunfish enthusiasts worldwide, a more than 4,000-pound sunfish was found tangledâ€twitter.com/i/web/status/1â€¦jK
cnni