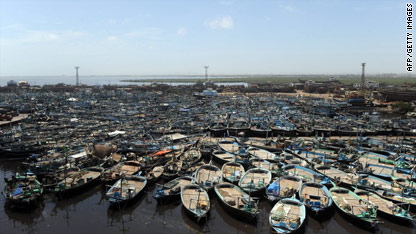 [Updated at 7:15 p.m.] Pakistani authorities dispatched Navy helicopters Thursday to alert fishermen near Karachi and parts of Balochistan to the expected arrival of Cyclone Phet and to urge them to return to shore, the state-run Associated Press of Pakistan reported. Read the full CNN.com story

Fourteen families marooned Thursday by high tides were evacuated by helicopter to higher ground, said Chief of Naval Staff Admiral Nauman Bashir.
Civilians along Pakistan's coast will receive priority in the relief effort, dubbed "Operation Madad," should it be needed, he said.

[Updated at 12:59 p.m.] More than 60,000 people were being evacuated from villages along Pakistan’s coast on Thursday as the country prepared for a strike from Cyclone Phet during the weekend. Officials said another 500,000 people could be affected by heavy rains and strong winds associated with the storm, according to reports from Karachi.

[Posted at 9:43 a.m.] Tropical Cyclone Phet was bearing down on the coast of Oman on Thursday, threatening to bring torrential rain and hurricane force winds to the Arabian Peninsula sultanate.

The forecast on stormtracker.com has Phet making a sweeping turn to the northeast, with the center of the storm just brushing the Omani coast near Al Ashkhirah on Friday before it heads across the Arabian Sea toward Pakistan at the weekend.

Pakistan’s GEO TV reported that Phet is expected to pass near heavily-populated Karachi and with heavy rains and strong winds, though the brush with Oman will reduce the storm from Category 4 to Category 1 strength before it hits the Pakistan coast.

Oman was evacuating residents of coastal areas as the storm approached with waves up to 26 feet high, according to a Reuters report.

Pakistani authorities advised all fishing vessels to return to port, and the government was opening relief camps to house residents who may be forced from their homes by the storm, Pakistan’s Dawn newspaper reported.

Phet threatens Oman’s coast three years after Tropical Cyclone Gonu, a Category 5 storm, roared along the sultanate’s coast, dropping eight inches of rain that turned streets into rivers in the capital of Muscat.

At least 28 deaths were blamed on Gonu.