A tornado touched down in central Illinois on Saturday, police said, but there were no immediate reports of injuries.

END_OF_DOCUMENT_TOKEN_TO_BE_REPLACED

The horse did not qualify for the Kentucky Derby. But its owner, WinStar Farms, also owns derby winner Super Saver. 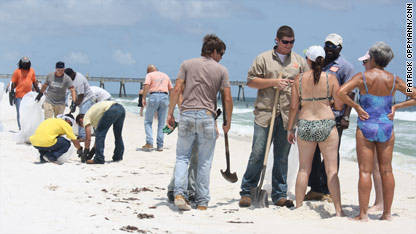 Here are the latest developments on the oil spill in the Gulf of Mexico, which began when the oil rig Deepwater Horizon exploded on April 20:

- BP Senior Vice President Bob Fryar said the company "was very pleased" with the progress made on funneling oil from an undersea cap up to a drilling ship.

- President Barack Obama said in his weekly address that the federal government was "prepared for the worst" in coping with the Gulf oil. He cited statistics that illuminated the "largest response to an environmental disaster of this kind in the history of our country":

-Â BP has funneled about 250,000 gallons of oil in the first 24 hours from a cap installed on the ruptured Gulf of Mexico well to a drilling ship a mile above, the company said Saturday.

- After reviewing new images and data, the federal government says it has opened more than 16,000 square miles of ocean along the Florida coast that was previously closed for fishing because of the oil spill. More than 13,000 square miles of that lies just west of the Florida Keys and Dry Tortugas. But it also closed a 2,275-square mile area off the Florida Panhandle, extending the northern boundary just east of the western edge of Choctawhatchee Bay. That means that 32 percent of the GulfÂ remains off limits for fishing.

- PresidentÂ Obama has invited the families of the 11 people killed in the Deepwater Horizon oil rig explosion to the White House and will offer condolences to them. White House Press Secretary Robert Gibbs said Obama plans to meet with the group on Thursday.

-Â The cost of the federal response effort to the Gulf of Mexico oil spill totaled $93 million as of June 1, according to a Friday letter from Secretary of Homeland Security Janet Napolitano and Coast Guard Adm. Thad Allen to congressional leadership. They are requesting that Congress approve a proposed provision that would make available up to an additional $100 million to the Coast Guard. 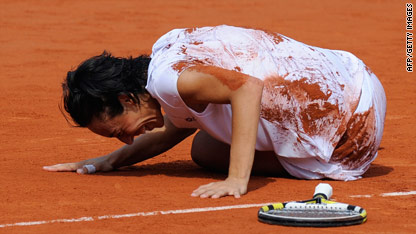 Francesca Schiavone kisses the court in Paris after winning the final point of the French Open on Saturday.

Schiavone, seeded 17th,Â is the first Italian to win the tournament in its 85-year history. Stosur was seeded seventh. FULL STORY

Arizona highway shut down due to suspicious vehicle

Authorities shut down part of a highway in southern Arizona Friday because of a suspicious vehicle, state authorities said.

END_OF_DOCUMENT_TOKEN_TO_BE_REPLACED

The Arabian leopard is one of the rarest and smallest big cats in the world; it's thought fewer than 200 adults livâ€twitter.com/i/web/status/1â€¦HN
cnni

12:01 am ET January 20, 2022 RETWEET
The US military released videos of the botched August 29 drone strike in Kabul that killed 10 Afghan civilians, incâ€twitter.com/i/web/status/1â€¦26
cnni

10:54 pm ET January 19, 2022 RETWEET
The United States has extradited a second suspect in the assassination of Haitian President Jovenel Moise, who wasâ€twitter.com/i/web/status/1â€¦mG
cnni