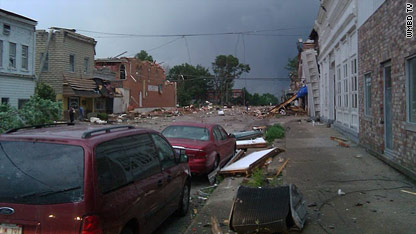 A tornado touched down in Elmwood, Illinois, on Saturday night, police say.

[Updated at 5:30 p.m. ET] The death toll in Ohio from severe weather Saturday and early Sunday has risen to seven, authorities said.

A 5-year-old child was among the deaths in Millbury, Ohio, according to Wood County dispatchers, who received the information from Lake Township Police Chief Mark Hummer. Four other victims ranged in age from 20 to 56, dispatchers said, and details on the remaining two were not immediately available.

A man was also found dead in the street in Millbury, and two adults died in a van in Lake Township, about five miles from Millbury, Blackwell said.

Severe weather struck much of the Midwest on Saturday and early Sunday. In Michigan, 11 people were injured when a storm struck Monroe County, Michigan, and damage to the exterior wall of the Fermi 2 Nuclear Power Plant prompted an automatic shutdown, said Dan Smith, spokesman for the county's emergency management division. The plant will remain closed until crews have assessed the damage, he said.

Ten people were taken to hospitals by ambulance, and one was flown, after the storm struck about 3 a.m. Sunday, Smith said. Field crews were assessing the number of homes and businesses damaged in Dundee Village and Dundee Township, he said.

Up to 500 people staying at a water park resort were evacuated safely to a middle school, Smith said.

Severe weather struck throughout the region.

A tornado touched down in central Illinois Saturday, police said, but there were no immediate reports of injuries.

END_OF_DOCUMENT_TOKEN_TO_BE_REPLACED 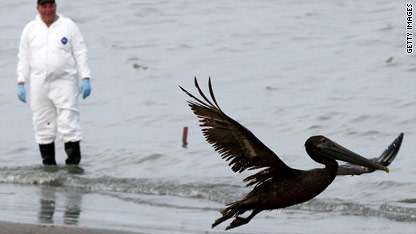 A brown pelican stained with oil in Louisiana on Sunday.

[Updated at 3:42 p.m. ET] Here are the latest developments on the oil disaster in the Gulf of Mexico, caused by the April 20 explosion on the Deepwater Horizon rig.

NEW:
BP had increased the amount of oil it funneled to the surface to about 441,000 gallons on Saturday, the company said Sunday. This was an increase from about 250,000 gallons on Friday.

In advance of approaching oil, Florida has about 250,000 feet of boom spread around the panhandle and has another 250,000 feet available, Florida Gov. Charlie Crist said.

Mississippi Gov. Haley Barbour said barely any oil had appeared on the state's shores, but its tourist industry was nonetheless feeling the pinch because of "misperceptions."

CLEANUP
Coast Guard Adm. Thad Allen, the federal government's response manager to the Gulf oil disaster, said BP has made progress in capping the leak, but he cautioned it was too early to call efforts a success.

"We're making the right progress. I don't think anyone should be pleased as long as there's oil in the water," Allen said.

BP Senior Vice President Bob Fryar said Saturday that the oil company "was very pleased" with the progress the company has made funneling oil from an undersea cap up to a drilling ship. "That operation has gone extremely well," Fryar said.

BP funneled about 250,000 gallons of oil in the first 24 hours from a cap installed on the ruptured Gulf of Mexico well to a drilling ship, the company said Saturday.

But the federal agency also closed a 2,275-square mile area off the Florida Panhandle, extending the northern boundary just east of the western edge of Choctawhatchee Bay. That means that 32 percent of the Gulf still remains off limits for fishing.

Tar balls and tar patties have been found in Florida on Pensacola Beach.

President Obama said in his weekly address Saturday that the federal government was "prepared for the worst" in coping with the Gulf oil.

He cited a series of statistics that illuminated the "largest response to an environmental disaster of this kind in the history of our country."

- 20,000 people are currently working to protect waters and coastlines.

Obama also reiterated his commitment to cleaning up the oil spill in his weekly address, recorded Friday when he visited Grand Isle, Louisiana.

"What I told these men and women - and what I have said since the beginning of this disaster - is that I'm going to stand with the people of the Gulf Coast until they are made whole," the president said.

The administration has tried to distance itself from oil company BP in recent days. The Justice Department has launched criminal and civil investigations into the spill. But that has not been enough to temper the frustration seething among coastline residents. BP officials were grilled this weekend by local leaders.

Oil that has already affected Louisiana, Mississippi and Alabama drifted steadily towards Florida.

POLITICS
President Obama plans to personally offer his condolences to families who lost relatives in the rig explosion, said White House spokesman Robert Gibbs. The president has invited the families of the 11 dead workers to the White House on Thursday.

The cost of the federal response effort to the Gulf of Mexico oil spill totaled $93 million as of June 1, according to a Friday letter from Allen and Secretary of Homeland Security Janet Napolitano to congressional leadership. They are requesting that Congress approve a proposed provision that would make available up to an additional $100 million to the Coast Guard.