Allen: It will take years after spill to restore environment 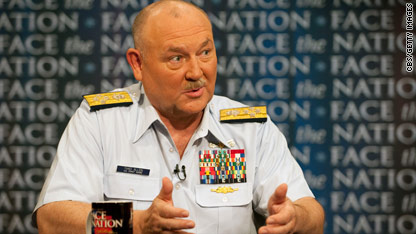 Coast Guard Adm. Thad Allen said the oil disaster will hold a siege on the Gulf until relief wells are completed at the end of the summer.

[Updated at 11:05 a.m.] Coast Guard Adm. Thad Allen, the federal government's response manager for the oil disaster, said Monday that roughly 120 miles of coastline in the Gulf of Mexico have been affected by the spill and it could take years to fully restore the environment impacted by the disaster.

Allen, who was speaking at a White House press briefing, was asked about his speculation that the disaster would continue into the fall of this
year.

"Well, I think we need to be realistic and honest and transparent with the American people," Allen said. "You know, when the relief well is finished
and it's capped, sometime in August, oil will have flowed to the surface in some manner because we probably won't get 100 percent containment, we
want as much as we can get, so there'll still be oil on the surface the day the well is capped."

Allen was asked whether his assessment about months might be what some experts called a "pipe dream." He clarified that when he mentioned that
the spill would take months to clean up - he wasn't including the long-term environmental impact.

"Dealing with the oil spill on the surface is going to go on for a couple of months," he said. "After that it'll be taken care of. I agree with you, long-term issues of restoring the environment and the habitats and stuff will be - will be years."

Allen said they will have to conduct natural resource damage assessments to determine what the long-term effects will be and what BP might need to
do to correct those problems.

He did point to some success in BP's efforts to cap the gusher saying that 11,000 barrels of oil had been collected from the broken well during the previous 24 hours.

[Posted at 10:21 a.m.]The government's point man overseeing response to the oil disaster in the Gulf will brief President Obama and the Cabinet in Washington on Monday.

And while we don't know what he's planning to say, Coast Guard Adm. Thad Allen made it very clear that though there may have been some small victories in the effort to contain and clean up oil the battle is far from over.

Allen, speaking on CBS' "Face the Nation," warned that even if the attempt to cap the well is successful in capturing some of the oil, more will still leak.

"There will be oil out there for months to come," Allen said.

In the meantime more oil will continue to spew out until relief wells are drilled and completed - which is expected to take until the end of the summer.

"This will be well into the fall," Allen said. "This is a siege across the entire Gulf. This spill is holding everybody hostage, not only economically but physically. And it has to be attacked on all fronts."

Allen to John King: Too early to be 'pleased' with BP progress

The colossal 180 million-year-old fossilized remains of an ichthyosaur have been found in the UK, in what researcheâ€twitter.com/i/web/status/1â€¦qK
cnni

2:00 pm ET January 16, 2022 RETWEET
Watch how noodles, rice and burgers are prepared and delivered by robots at the Beijing Olympics Village.â€twitter.com/i/web/status/1â€¦eT
cnni