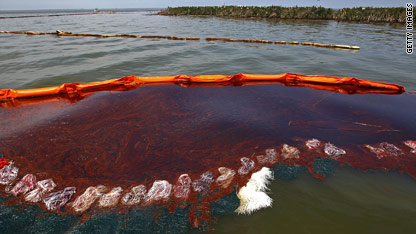 Oil pools near a boom alongside Cat Island near Grand Isle, Louisiana.

[Updated at 7:22 p.m.] It's Day 49 of the oil disaster in the Gulf of Mexico. We'll be bringing you the latest developments on the story throughout the day. Here's where we stand right now.

- Workers in Louisiana have built about 2 miles of sand berms along the state's coast, Gov. Bobby Jindal said.

- BP Managing Director Bob Dudley said the company has agreed to pay $360 million toward the berm project, which is aimed at raising walls of sand along Louisiana barrier islands to catch the oncoming slick.

- Tar balls ranging in size from less than an inch to about 4 inches continued to wash up on Florida's Pensacola Beach and Perdido Key on Monday, but the oil sheen remained 5 to 10 miles offshore, Escambia County Commissioner Gene Valentino said.

- Frustration is "rapidly escalating" along the Gulf Coast, Kelby Linn, a real estate agent and Chamber of Commerce official on Alabama's Dauphin Island, told a House subcommittee meeting in Louisiana. "We do not feel that BP is going to be stepping up to the plate," Linn said.

- The widows of two men killed aboard the offshore drill rig that sank in April, ripping open the undersea gusher, told members of Congress that more needs to be done to keep oil companies from putting profits ahead of safety.

- BP says that it has closed one of four valves on the top of the cap that it had put in place last week, and that the process is working well. The company says it may not close all four of the valves because engineers think the valves may be releasing more gas than oil.

- Federal authorities reopened about 340 square miles of federal waters off the Florida Panhandle east of Destin to fishing Monday after finding no sign of oil in that area, the National Oceanographic and Atmospheric Administration announced.

- The federal government has accepted Canada's offer of 3,000 meters - or more than 9,800 feet - of ocean boom to help combat the oil disaster, a State Department spokesman said Monday. The boom is expected to arrive in the Gulf on Tuesday.

–The total amount of crude being collected from the ruptured undersea well responsible for the Gulf oil disaster increased Sunday to roughly 466,000 gallons, or 11,100 barrels, according to estimates from BP and Coast Guard Adm. Thad Allen, the federal government's response manager for the spill. On Saturday, BP indicated that it had increased the amount of crude being funneled to the surface to roughly 441,000 gallons.

- Since the containment cap was installed Friday, the total number of gallons of oil being captured on a daily basis has nearly doubled, Allen said at the White House on Monday. BP "anticipates moving another craft" to the well site shortly in order to raise the capacity of oil that could be captured on a daily basis to roughly 840,000 gallons, or 20,000 barrels, Allen said.

- Allen said Monday that roughly 120 miles of coastline in the Gulf of Mexico have been affected by the spill and it could take years to fully restore the environment impacted by the disaster.

Allen said BP has made progress, but cautioned it was too early to call efforts a success. "We're making the right progress. I don't think anyone should be pleased as long as there's oil in the water," he said.

After reviewing new images and data, the National Oceanic and Atmospheric Administration reopened more than 16,000 square miles of ocean along the Florida coast that was previously closed for fishing because of the oil spill.

More than 13,000 square miles of that lie just west of the Florida Keys and Dry Tortugas. But the federal agency also closed a 2,275-square mile area off the Florida Panhandle, extending the northern boundary just east of the western edge of Choctawhatchee Bay. That means that 32 percent of the Gulf still remains off limits for fishing.

- Allen was in Washington to brief President Obama and the cabinet on the administration's ongoing response to the incident.

- President Obama plans to personally offer his condolences to families who lost loved ones in the rig explosion, said White House spokesman Robert Gibbs. The president has invited the families of the 11 dead workers to the White House on Thursday.

- The cost of the federal response effort to the Gulf of Mexico oil spill totaled $93 million as of June 1, according to a Friday letter from Secretary of Homeland Security Janet Napolitano and Coast Guard Adm. Thad Allen to congressional leadership. They are requesting that Congress approve a proposed
provision that would make available up to an additional $100 million to the Coast Guard.