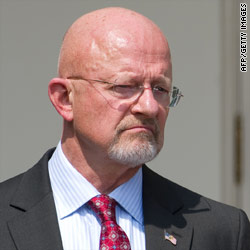 President Obama called him one of America's "most experienced and most respected intelligence professionals." Obama nominated the top Pentagon official to be the new director of national intelligence on Saturday.

Clapper, who retired from the Air Force in 1995 after a 32-year career, was head of the National Geospatial-Intelligence Agency from September 2001 to June 2006.

Clapper would replace Dennis Blair, who resigned at the end of last month. Obama said he'll be looking for Clapper "to ensure that we have the most capable and efficient intelligence community possible."

If confirmed, Clapper will become the nation's fourthÂ director of national intelligenceÂ in five years. The position was created after the September 2001Â attacks to oversee the 16 agencies of the U.S. intelligence community.

The legendary White House correspondent has retired, the Hearst Corp. said Monday, Â in the wake of controversial comments about Israel and the Palestinians.

ThomasÂ recentlyÂ said that Israel should "get the hell out of Palestine" and that the Jewish people should go home to "Poland, Germany ... and America and everywhere else."

CNN has learned that Thomas also was dropped by her agent Nine Speakers Inc. on Sunday, and Craig Crawford, who co-authored "Listen Up, Mr. President" with Thomas, said in a blog post that he "will no longer be working with Helen on our book projects."

Thomas apologized for her comments that she made to Rabbilive.com about Israel.

The singer-songwriter says that nothing really bothers him.

CNN reports that tar balls already have washed up on beaches there in the wake of the Gulf of Mexico oil disaster.

"I've been through hurricanes, earthquakes, been shot at by the Jamaican SWAT teams. Nothing really bothers me," Buffett said. "We're going to be open for business come hell or high water. People in the Panhandle are tough people."

According to the newspaper, Buffett - in flip-flops, shorts and shades - also said the oil disaster should prompt Americans to pursue solar and wind power and cut down on oil use.

The Kalamazoo Central High School Class of 2010 valedictorian willÂ give her speech Monday from the same podium as President Obama.

Obama will deliver the commencement address there because the Michigan high school won this year's Race to the Top Commencement Challenge.

The Kalamazoo (Michigan)Â Gazette reports that Lee was born in Tucson, Arizona, to South Korean parents, who returned home when Lee was in preschool. They came back toÂ the U.S.Â in 2006 and a year later left Lee with her brother, a Western Michigan University student, so she could finish her education here.

According to the newspaper, Lee plans to attend Kalamazoo University and become a surgeon.

"I'm like, ooh," Lee told the paper. "By coming to Kalamazoo Central, I've had every opportunity I could imagine."

Charlie Sheen will stand before a judge Monday afternoon to plead guilty to charges stemming from a Christmas morning argument with his wife in Aspen, Colorado, a prosecutor said.

If the judge accepts the plea agreement, the television star would spend the next month as a theater intern by day and a jail inmate at night. The proposal includes a month of community service for Sheen, 44, working with Theatre Aspen, according to Price, the theater's artistic director.

"We've often been in a position of helping people fulfill their community service, but he would be our highest profile intern," Price said.

Sheen, who began acting professionally in 1974, may teach master classes for professional actors working during Theatre Aspen's summer productions. The summer plays include "The True Story of the 3 Little Pigs!" - billed as "a clever musical which follows the fate of the Big Bad Wolf."

Price said, "There's no part in that for him."

Joby Aviation's electric, six-rotor aircraft can take off like a helicopter yet fly like a plane. Here's how the coâ€twitter.com/i/web/status/1â€¦qb
cnni

5:01 am ET October 16, 2021 RETWEET
Oscar-nominated actor Jonah Hill wants the world to know that his body is not an appropriate talking point.â€twitter.com/i/web/status/1â€¦5N
cnni

4:01 am ET October 16, 2021 RETWEET
Virgin Galactic has pushed back the start of full commercial service to the fourth quarter of next year, sending shâ€twitter.com/i/web/status/1â€¦8p
cnni

3:01 am ET October 16, 2021 RETWEET
Evergrande's unraveling is still commanding global attention, but its troubles are part of a much bigger problem. cnn.it/30ysIRF
cnni

2:01 am ET October 16, 2021 RETWEET
"We need some of the world's greatest brains and minds fixed on trying to repair this planet, not trying to find thâ€twitter.com/i/web/status/1â€¦55
cnni