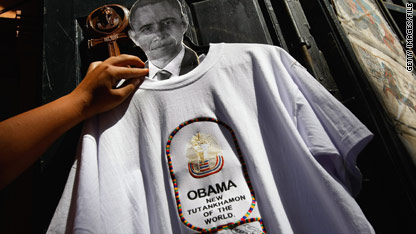 After President Obama's speech in Cairo last year, Arabs were hopeful about the new President, selling shirts and celebrating him. Now, things are a bit different.

A lot has changed since the symbolic Cairo speech President Barack Obama dedicated to Muslims exactly a year ago.

Back then, I wrote a story headline "Middle East eagerly awaits Obama with curiosity and cautious optimism."

Today, it is safe to say that the curiosity has turned into skepticism and the cautious optimism has been replaced by flat-out pessimism. Headlines such as this one: "Muslim praise for Obama dries up a year after Cairo speech" are commonplace for the media who cared to remember the speech on its first anniversary. But, most Arab media didn't give the anniversary any coverage or even mention.

The Gaza flotilla disaster couldn't have come at a worse time for Obama's image among Muslims and Arabs. After all, 9 Turks died, when Israel stormed a flotilla of ships carrying aid to Gaza in an attempt to break a 3-year-old Israeli blockade.

"The White House is trying to understand the circumstances of what happened," is what they heard.

Comparing this reaction and U.S. efforts to block a U.N. resolution against Israel and how other countries and nations around the world responded to the Israeli raid on the flotilla, many Arabs and Muslims found it easy to draw the conclusion that Obama's Muslim love fest is over.

To know how Arabs feel about the Gaza flotilla attack, all you have to do is cruise through their various media, print and broadcast as well as online. There is no shortage of articles, cartoons and opinions all depicting Israel as a giant menace that always acts above the law, kills, maims and blockades the Palestinians without a shred of remorse or concern about any repercussions. In political cartoons across the region, Israel is portrayed as a boat-swallowing shark, a careless dolphin killer and an unrelenting bull defying international condemnation.

In Oman, Al-Watan newspaper carried this headline: "Israeli crime shakes the world's consciousness, and the victims are aid ambassadors from 36 nations."

The Sultanate of Oman, like most Arab nations, condemned the attack and demanded an immediate end to the Gaza siege. One editorial cartoon in the paper shows Israel controlling life support on a Gaza under siege.

Qatar's The Nation newspaper also had a scathing reaction to the attack and several political cartoons expressing how most Arabs feel about the flotilla attack and Israel's role in it. This one equates the Jewish state to "Terror State" and one of them, is entitled "the latest Israeli horror movie."

Moderate voices are calling on Arabs to seize the opportunity created by last week's flotilla confrontation.

Prominent columnist Diana Moukalled contends the incident has created international momentum in favor of the Palestinian plight in Gaza.

"The diverse responses from the West were neither weak nor lenient despite the obvious reluctant position adopted by the Security Council and the White House," she said in her weekly column in Asharq Alawsat.

In order for an equal battle with Israel, we must not get dragged into a game of bloodshed," she added.

Others also have called for calm and moderation in approach and response. The flotilla tragedy certainly united Arabs in many ways. It especially solidified and brought to the surface their animosity towards Israel and highlighted their distrust of the United States while casting a shadow on President Obama's intentions towards Arabs and Muslims.

Those who were moved when they heard President Obama address Muslims directly and hoped for a better tomorrow, are now disappointed, to say the least. They watched other leaders, including some of Israel's staunchest allies, react to a tragedy very close to their heart, but didn't hear from the man who traveled all the way to Cairo last year to talk to them and win their hearts and minds.

Obama was already facing a challenge with the people - not the leaders - of the Arab world. The majority of Arabs were waiting to see if he will come through on his promises to bridge the gap and promote understanding and mutual respect between East and West.

Post-flotilla he finds himself with a tarnished image among those who trusted him and believed he might bring positive change. The intelligentsia that cheered him on last year sent him messages this week to his Twitter account reminding him of his Nobel Peace Prize and urging him to take a tough stance on Israel. With no clear answer coming back to them, Obama might find it much harder to restore the shaky trust he was able to build through his Cairo speech.