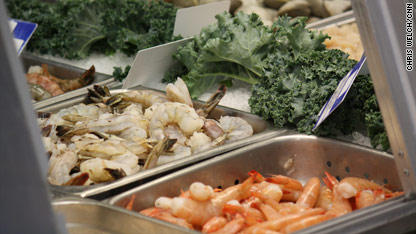 There’s very little for sale on the ice-lined shelves of Minneapolis’ Coastal Seafood that comes from the Gulf of Mexico.

But that doesn’t mean the Gulf oil disaster isn’t having a small ripple effect on the seafood industry in the Twin Cities.

One customer, Heath Magnuson, said the disaster in the Gulf was part of the reason he decided to buy directly from the seafood distributor.

“I haven't been shopping at the supermarkets as much as I used to because of it [the oil spill],” said Magnuson, who was shopping with his 5-year-old son, Holden. “That's why I came to this store.”

Coastal Seafood buys from vendors all over the world, including the Mediterranean, Alaska, Hawaii, Asia, and the United States, according to manager Damon Holston.

Holston said they don’t usually distribute much from the Gulf coast states, and haven’t for a long time.

“There's risks associated with Gulf oysters and the warm water and stuff like that, and we just decided to not do it,” he said. “The Louisiana shrimp I think we bought a few times in the last few years, but they're extremely expensive.”

Coastal Seafood still gets some shrimp from Texas and Mexico, but Holston said it has not been affected by the oil because “the Gulf Stream is pushing away from those areas.”

Despite that, prices for all seafood “has already started to fluctuate,” Holston said.

“That’s based on the fact that shrimp prices were at all time lows for a couple years,” he said. “People are kind of using the oil spill to justify raising some of the pricing, just as a tool to do that.”

As an example, he said he’s noticed a jump in price for tiger shrimp.

“It’s Vietnam and southeast Asia where most of those [tiger shrimp] come from and that’s obviously nowhere near the oil spill.”

Lisa Randall, who stopped into the store with her 3-year-old daughter, Aria, said she had no qualms about buying Gulf seafood.

“When things like this happen you realize just how precious fish and the health of our oceans are, so I'm probably buying more than I used to,” Randall said. “I just think it brings about an awareness.”

Another customer, Mark Johnson, expressed some initial concern for the shrimp for sale.

“Where are [these shrimp] caught from, do you know?” Johnson asked over the counter.

He still bought some, after learning they were from off Mexico’s coast.

Holston suggested that anyone shopping for seafood – whether in Minnesota or anywhere in the country – should develop a relationship with their local seafood distributor.

“Learn to trust them and what they say,” he said. “I would say keep eating seafood. This is affecting the people down there obviously, but it shouldn't affect what's on your plate in Minnesota.”