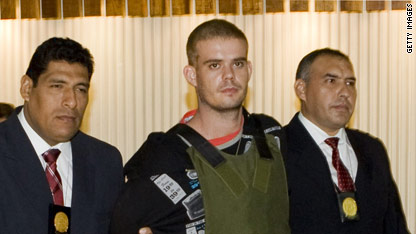 [Posted at 11:08 a.m] Joran van der Sloot, the longtime suspect in the disappearance of an Alabama teenager in Aruba, is slated to take Peruvian authorities on a re-enactment Tuesday at the hotel room where the body of a young woman he has confessed to killing was found last week, officials said.

The suspect told authorities Flores had found some information on his laptop computer that tied him to the disappearance of Alabama teenager Natalee Holloway five years ago.

He could be formally charged as early as Tuesday, Peruvian authorities said.

Van der Sloot and Flores had returned to his hotel room after meeting at a casino. Officials say van der Sloot went out to get some coffee and found her reading his computer when he returned.

He became enraged, investigators said, and beat her to death. Her neck was broken.

The Dutch citizen broke down in tears when he offered his confession in front of investigators and his attorney, Peruvian officials said.

Van der Sloot's attorney in Peru could not be reached for comment Tuesday.

Van der Sloot, 22, was arrested twice in connection with Holloway's disappearance in Aruba but was released for lack of evidence. He has denied any involvement and has not been charged.

He is slated to take authorities on a re-enactment of the crime at the Hotel Tac, where he was staying. Flores' body was found in the room registered to van der Sloot. Video from hotel security cameras show van der Sloot and Flores entering his room at 5:33 a.m. on May 30. Her emerged alone and left the hotel more than three hours later, the video shows.

He was arrested in Chile on Thursday and returned to Peru on Friday.