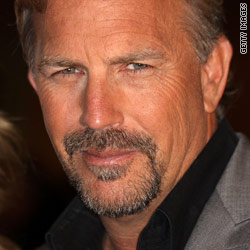 The star of such movies as "Field of Dreams" and "Waterworld" is scheduled to testify Thursday at a House Committee on Science and Technology hearing on solutions to the Gulf oil disaster.

The Hill reports that Costner has invested some $26 million into his Ocean Therapy Solutions device, which uses centrifugal force to separate oil from water. According to The Hill, last month BP approved the machine for testing.

The actor and activist visited New Orleans, Louisiana,Â in May. WDSU-TV reports that he demonstrated the oil extraction device, which Ocean Therapy officials say will clean up the water to 97 percent.

"I just am really happy that this has come to the light of day," Costner said. "I'm very sad about why it is, but this is why it was developed, and like anything that we all face as a group, we face it together."

Stopping the oil leak in the Gulf may require theÂ U.S. to draw upon unexpected ingenuity and experience.

"It looks like the ocean floor is bleeding, and we know how to stop bleeding," said Ramee, cardiology chief at Ochsner Medical Center in Baton Rouge, Louisiana.

WWL-TV reports that Ramee and Khoobehi, a surgeon at Louisiana State University Health Sciences Center, believe the concept used to stop bleeding - going against the blood pressure in an artery - can be used to stop the gushing oil.

Khoobehi describes his device as a circular wedge that begins small and gets larger, supported by a heavy concrete plug. As the pressure builds, the weight of the concrete block would counteract the pressure of the leak. Both doctors told the TV station that they have tried to get their concepts to government officials, oil support companies, and BP itself, but have not heard back from anyone.

WWLTV: Surgeons say they have a plan to patch oil leak

Mother Jones magazine reports that Greene says he paid the $10,400 filing fee and other campaign expenses from his own pocket. He ran without signs or a website. He still lives in his family home and has had no job for the past nine months.

According to the magazine, Greene's unexpected campaign raised speculationÂ by local media that he might have been a Republican plant. He denies that.

Greene says the idea to run came to him in 2008 when he was serving in Korea.

Mother Jones: Who is Alvin Greene?

The Yale University women's hockey team senior center is suffering from leukemia and has approximately 30 days remaining to find a bone marrow donor. Schwartz was diagnosed with acute myeloid leukemia in December 2008.

Yalebulldogs.com reports that earlier this year, after five rounds of treatment and being declared in remission,Â Schwartz returned to Yale for the spring semester. In April she learned her cancer had returned and she would need to undergo more chemotherapy.

Now thatÂ Schwartz is in need of a transplant, the Yale athletic department is helping her doctor to spearhead a worldwide effort to find her a donor.

Social media have played a role in the drive to find a donor. The Facebook group "Become Mandi's Hero" enlisted 1000 fans in a 24-hour period.

On Monday, Schwartz received a call from former Olympic skater Dan Jansen - whose sister had leukemia - to offer his support.

One was a veteran prosecutor nicknamed "Blood," the other was a young defense attorney in her first murder trial.

When defense lawyer Mary Welcome told Wayne Williams, the suspect in theÂ Atlanta child murders, that he had a right to be indignant on the witness stand, Williams blew up at prosecutor Jack Mallard the next morning and, among other things, barked, "You must be a fool."

Mallard used Williams' own words against him to tell the jury he was "a Jekyll and Hyde."

Thirty years later, Williams says, "I was my own worst enemy."

One state Supreme Court justice would later call the defense incompetent and ineffective. Mary Welcome said the defense had neither the time nor the money to defend the case properly.

South Korea's public broadcaster has apologized over the death last year of a horse that was tripped during the filâ€twitter.com/i/web/status/1â€¦WM
cnni

9:51 pm ET January 21, 2022 RETWEET
A man was arrested for allegedly creating multiple disturbances and exposing himself to a flight attendant and passâ€twitter.com/i/web/status/1â€¦Lk
cnni

9:29 pm ET January 21, 2022 RETWEET
If the anti-abortion movement in the US wins the generational fight that it launched in the courtroom, the battle lâ€twitter.com/i/web/status/1â€¦Kv
cnni