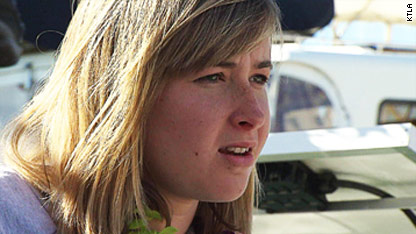 "We are actively seeking out some sort of air rescue but this is difficult due to the remoteness of her location," the family's blog post said. "Australian Search and Rescue have arranged to have a [Qantas] Airbus fly over her location at first light (she is 11 hours later). They will not be able to help her other than to talk via marine radio if they are able to get close enough. Hopefully, they will be able to assess her situation and report back to us."

The post also said Abby "has all of the equipment on board to survive a crisis situation like this."

"She has a dry suit, survival suit, life raft, and ditch bag with emergency supplies," the family's post said. "If she can keep warm and hang on, help will be there as soon as possible."

The Australian coast guard and the Reunion Island government - a French island that is the closest land to her last position - are involved in efforts to help Sunderland, according to Peter Thomas, a freelance journalist who spoke to Sunderland's father Thursday.

[Posted at 2:09 p.m. ET] A teenage girl attempting to sail solo around the world has gone missing after sending out distress signals in the Indian Ocean, according to a CNN affiliate in her hometown.

Abby Sunderland, 16, of Thousand Oaks, California, has not been heard from since losing contact with her family during a storm Thursday, her brother told CNN affiliate KTLA in Los Angeles.

Sunderland activated her emergency beacon locating devices an hour after losing contact with her family, and a rescue effort is under way. The nearest boat is believed to be at least 40 hours away, according to KTLA.

Sunderland celebrated passing the halfway point Monday on her quest to circumnavigate the globe alone in a sailboat, according to her website. She initially planned to be the youngest to make the trip nonstop, but that was undone in early May when she stopped for repairs in South Africa.

"I've been in some rough weather for awhile with winds steady at 40-45 knots with higher gusts," she wrote Wednesday on her blog. It took her two hours to repair a torn sail in the wind and high waves, and her internet connection on board her 40-foot boat, Wild Eyes, was failing, she wrote.