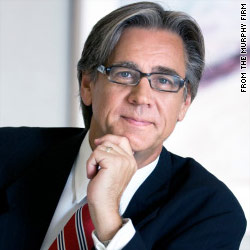 The attorney and Alabama native is working with lawyers from Louisiana, Alabama, Texas, Pennsylvania, Mississippi and Florida to prosecute claims for those who have been hurt by BP's Deepwater Horizon oil disaster.

Kuykendall told CNN on Thursday that he'll be representing fishermen, business owners and land owners who have suffered economic injury as a result of the oil catastrophe.

Kuykendall is with the Murphy Firm in Baltimore, Maryland, as well as Kuykendall & Associates in Fairhope, Alabama. He says since 1995, his cases have resulted in verdicts and settlements totaling more than $2 billion.

Kuykendall said he was appointed by former Alabama Gov. Don Siegelman to his commission on environmental affairs and that he participates in the Water Keepers Alliance.

"I have prepared my entire professional life for this," Kuykendall said. "But I never expected it to happen in my back yard."

The mayor of Baton Rouge, Louisiana, will join other coastal mayors whose towns and cities are affected by the oil disaster. They will get together at the 78th annual meeting of the U.S. Conference of Mayors, Friday through Monday in Oklahoma City, Oklahoma.

Hundreds of the nation's mayors of cities with populations of 30,000 or more are scheduled to discuss the economy, job creation, immigration, education reform and the increase in vacant and abandoned properties across the country.

In one session on Sunday, according to theÂ conference website, Gulf Coast mayors will sit down "with any other mayors who wish to provide assistance and learn more on how they can help with any challenges related to BP and the federal government."

Holden became the first African-American mayor-president of East Baton Rouge Parish in January 2005 and was elected to a second term in October, 2008.

Australian authorities on Friday made contact with the 16-year-old American girl who triggered a distress signal while attempting to sail solo around the world. But it could be a day before a French fishing vessel pulls Sunderland and her boat, Wild Eyes, to shore, the Australian Maritime Safety Authority said.

Sunderland's vessel is adrift in the middle of the Indian Ocean some 2,000 miles east of Madagascar, 2,000 miles west of Australia and 500 miles north of the French Antarctic Islands. Her family began scrambling to organize a search-and-rescue effort for her after they learned her emergency beacon was detected just an hour after they last spoke to her on Thursday.

Sunderland began her journey from Marina del Rey, California, on January 23 with the goal of sailing her 40-foot boat around the world without stopping. She has kept in touch with family and followers through a satellite telephone.

Of the 5.3 million Americans suffering from Alzheimer's disease, some 500,000 have a younger-onset version, and the CBS News correspondent and his wife, Jan, are living through the terrible impact of the disease.

In 2005, Jan was diagnosed with younger-onset Alzheimer's at age 55. Today, when Barry visits her at an assisted-living facility, she has no memories of their 25-year marriage or of her own work as a TV journalist. Petersen has written about the experience in a new book, "Jan's Story: Love Lost to the Long Goodbye of Alzheimer's" to be released on June 15.

Peterson told The Denver Post's William Porter that he has met a widow, Mary Nell, and has fallen in love with her.

"I know some people will condemn me for it, but the person I was married to doesn't know me now," he said. "It's excruciating, but life goes on. It must."

The Wall Street Journal reports that major pharmaceutical companies have just agreed to share results from failed clinical trials to try to determine what can be done to improve the development of new Alzheimer's drugs.

The Pittsburgh Steelers quarterback gave his first one-on-one interview since a young woman accused him of sexual assault in Georgia.Â He saidÂ he's going to strive to be the best role model and community leader he can be off the field.

CNN affiliate WTAE in Pittsburgh, Pennsylvania,Â reports that law enforcement authorities investigated a 20-year-old student's claim that Roethlisberger sexually assaulted her in a nightclub bathroom on March 5. No charges were filed against the football player, and his attorney has denied that there was any criminal activity.

In an interview with WTAE's Sally Wiggin, Roethlisberger said he knew he had made mistakes as his career began taking off.

"All of a sudden, on the field, I became 'Big Ben.' Off the field, I was still Ben Roethlisberger who my parents raised, the Christian that family friends are important and being nice to people, whatever," he said. "And next year, as we won the Super Bowl and so on and so forth, I got caught up becoming 'Big Ben' the whole time. I lost track of who Ben Roethlisberger was. And it's not something I'm proud of."