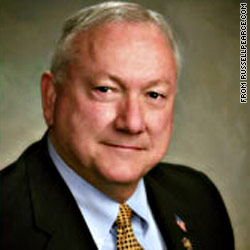 The Arizona state senator who pushed SB 1070 - the controversial immigration law that allows law enforcement officers to question the immigration status of the people they stop - has a new idea.

According to TIME, Pearce says the 14th Amendment has been "hijacked" by illegal immigrants.

"They use it as a wedge," Pearce says. "This is an orchestrated effort by them to come here and have children to gain access to the great welfare state we've created."

The pastor at Pilgrim Rest Landmark Missionary Baptist Church in Lodi, Arkansas, has been giving shelter to relatives of the dead and missing after last week's flash flood at an Arkansas campground.

Rescuers have found a 19th body and one person remains missing, state police reported Sunday. A wall of water swept through the Albert Pike Recreation Area before dawn Friday, when most campers were sleeping. The park is located along the Caddo and Little Missouri rivers, and the flood struck so quickly, there was little chance for campers to escape.

USA Today reports that about 100 people had gathered at Cowart's church, where the American Red Cross set up to provide help. Cowart also visited the camping area with some 25 family members.

"They're struggling to try to even grasp what's happened to them," said Cowart. "We're trying to help them with their grieving, to deal with the mental and emotional shock they're experiencing. They were living at the campsite ... enjoying their families. And then in a few hours, everything's destroyed."

The high school chemistry teacher -Â who has opposed Chicago, Illinois, Mayor Richard Daley's ideas to fix his city's public schools -Â won the leadership of the Chicago Teachers Union this past weekend.

The Chicago Sun-Times reports that Lewis organized protests against the mayor's Renaissance 2010 program, which has led to school closings and the loss of union teaching jobs.

The Chicago Public Schools system's deficit is estimated at some $437 million, reports the newspaper, and up to 2,700 teachers and 300 nonteaching union members could lose their jobs if school system budget-balancing measures are adopted.

"Our plans are to defend public education - that's what it's always been from the very beginning," said Lewis, 56, who teaches at King College Prep High School and will take office on July 1. "We can't look at massive layoffs and 35 to 37 students in the classroom."

Thirteen patients at the Peak One Medical Center in Frisco, Colorado, got free surgery Saturday, procedures that they would not have been able to afford, according to the patients.

CNN affiliate KUSA-TV in Denver reports that Janes got the idea while he was volunteering in Haiti after the January earthquake. He says he met another doctor from Colorado who was offering free care where he worked. So Janes persuaded his facility's six doctors and 17 other professionals to offer medical services to patients who had no health insurance and needed to get back on their jobs.

Janes and other volunteers say that when it's work that comes from the heart, a day of free surgeries is priceless, and worth doing again.

"I hope it can be at least a yearly occurrence," Janes said.

On Sunday night, the theater community showed its appreciation for New York's finest when 11 officers from the Midtown North and South precincts were given a special Tony Award for excellence in the theater.

The New York Daily News reports that when all 38 Broadway theaters are full, some 50,000 people need directions and protection in a 13-block area. According to the newspaper, the special award was decided upon before the May 1 incident in Times Square when officers found a car bomb allegedly left by Faisal Shahzad, a Pakistan-born resident of Bridgeport, Connecticut.

Lopez, who has been with the theater squad for almost 20 years, told the newspaper that he has not considered a life on the Broadway stage. Lopez said, "Not yet. There's more job security in police work."

You can now live on a pod in the sea in Panama. cnn.it/3dxZLf2
cnni

2:00 am ET August 17, 2022 RETWEET
This piece on the dire water shortage facing those that rely on the Colorado river has me shook. It is worse than Iâ€twitter.com/i/web/status/1â€¦FT
sarasidnerCNN

1:00 am ET August 17, 2022 RETWEET
A painting believed to be by Pablo Picasso and estimated to be worth millions of dollars has been found during a drâ€twitter.com/i/web/status/1â€¦zj
cnni

You can now live on a pod in the sea in Panama. cnn.it/3dxZLf2
cnni

2:00 am ET August 17, 2022 RETWEET
This piece on the dire water shortage facing those that rely on the Colorado river has me shook. It is worse than Iâ€twitter.com/i/web/status/1â€¦FT
sarasidnerCNN

1:00 am ET August 17, 2022 RETWEET
A painting believed to be by Pablo Picasso and estimated to be worth millions of dollars has been found during a drâ€twitter.com/i/web/status/1â€¦zj
cnni