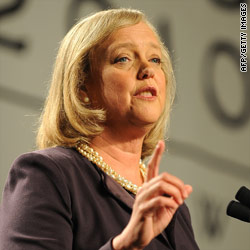 In June 2007, the current Republican candidate for governor of California allegedly became angry at an eBay employee and shoved her in an executive conference room.

The New York Times, after interviewing multiple anonymous sources with knowledge of the incident, reports that Young Mi Kim was preparing the eBay chief for a news media interview when the dispute began.

According to the newspaper, Kim hired a lawyer after the incident, but the dispute was resolved under the supervision of a private mediator, and the company paid Kim a six-figure settlement.

Kim, who is now an eBay senior manager for corporate and executive communications, said in an e-mail that she and Whitman had overcome their differences.

Police in northern Pakistan say they have detained an American who claims he was on a mission to kill al Qaeda leader Osama bin Laden.

London's Express newspapers report that the 52-year-old construction worker from California was found on Sunday in a forest in Chitral, a remote region close to the Afghan border, armed with night vision equipment, a pistol, a dagger and a sword.

Police were questioning Faulkner, who said he had visited Pakistan seven times.

The North Carolina congressman reiterated his apology Monday after an online video surfaced showing he was involved in a physical altercation with two young men who approached him on a Washington street and asked the Democrat whether he supported President Obama's agenda.

"The truth is I had a long day, it was the end of the day, almost sunset," he told reporters on Capitol Hill.

The exchange was shown in an edited video posted anonymously online Monday.

"I've been spat at, pushed on and threatened before, and that's no excuse for my not walking on by," Etheridge said while declining to disclose if more words were exchanged. "Just no excuse."

The six-term congressman also said he still does not know who the young men are.

"Who are you?" a clearly frustrated Etheridge replies when the two men approachÂ him with a camera on a Washington street. When the purported students don't answer, Etheridge is seen slapping the camera out of one man's hands.

"We are just here for a project," one replies.

The outgoing president of the United Auto Workers gave a fiery farewell speech at the union's national convention in Detroit on Monday.

He declared, "There is strong evidence that the worst is behind us and the industry is clearly rebounding."

According to London's Guardian newspaper, the former Ford factory chassis line repairman has led some 513,000 automotive employees for the past eight years. He faced the decline in union membership, job cuts, wage cuts, plant closures, and the government takeover of GM and Chrysler. But, the newspaper reports, he emerged as one of the most powerful leaders in Detroit.

"We faced these challenges and charted a course that led our great union down a path to survival," he told cheering conventioneers. "Leaner, yes, but stronger, wiser and more determined as well."

The Detroit News reports that Gettelfinger, 65, also urged UAW members to support union-friendly candidates in the November election. The UAW is scheduled to elect Gettelfinger's replacement later this week.

The Detroit News: Gettelfinger led UAW into new era that redefined his union

Their eight-year partnership has taken center stage due to the ongoing debate on same-sex marriage in California.

On Wednesday, closing arguments are scheduled in the federal trial on a challenge toÂ California's Proposition 8, which bans same-sex marriage.Â  The case is being heard in U. S. District Court in San Francisco. Two couples - Perry and Stier, and Jeffrey Zarrillo and Paul Katami of Los Angeles -Â are at the heart of the case, arguing that California's ban on gay marriage is unconstitutional.

They are asking Chief Judge Vaughn Walker to issue an injunction against Proposition 8's enforcement. The case will likely head to the U.S. Supreme Court no matter what the outcome. It is expected to set legal precedents that will shape society for years to come and result in a landmark court decision that settles whether Americans can marry people of the same sex.

For Perry and Stier - who have four sons together in Berkeley - andÂ Zarrillo and Katami, the issue is simple. They say the case boils down to nothing more than equal protection under the law, and that their sexual orientation should not prevent them from getting married.

JUST IN: Walter Smith, who guided Scottish club Rangers to 10 league titles, has died at the age of 73. cnn.it/3mdrL9C
cnni

6:30 am ET October 26, 2021 RETWEET
After qualifying for the Olympics, runner Annet Negesa was told her natural levels of testosterone were too high toâ€twitter.com/i/web/status/1â€¦i6
cnni

6:00 am ET October 26, 2021 RETWEET
Embattled conglomerate Evergrande rattled global markets by warning it could default on its huge debts. Since then,â€twitter.com/i/web/status/1â€¦K9
cnni