[Updated at 9:30 p.m.]
Here are the latest developments on the oil disaster in the
Gulf of Mexico, which unfolded after an explosion aboard the drilling rig Deepwater Horizon on April 20:

- The chief of Anadarko Petroleum Corp. said Friday that the oil spill in the Gulf was the "the direct result of BP's reckless decisions and actions" and, as such, BP should continue to pay all legitimate claims. BP was the company's partner in the drilling of the well.

END_OF_DOCUMENT_TOKEN_TO_BE_REPLACED

BP is clarifying comments Chairman Carl-Henric Svanberg made Friday in a broadcast interview, saying BP Chief Executive Officer Tony Hayward will relinquish control over the company's daily operations in the Gulf of Mexico.

BP spokesman Robert Wine says Dudley's duties involve political and community relationships. Dudley is from Mississippi, a state whose coast has been greatly affected by the oil spewing through the Gulf since the BP-operated Deepwater Horizon rig exploded off shore almost two months ago.

Obama administration lawyers are planning to file a legal challenge to a controversial Arizona immigration law within a month,┬Ā according to a senior administration official.

Nine in ten Americans say that the situation in the Gulf of Mexico is still out of control, but roughly half say that it is not getting any worse, according to a new national poll.

But will the oil spill get any better?

A CNN/Opinion Research Corporation survey released Friday indicates that about half the public says that the Gulf will eventually recover, with half saying that will never happen.

According to the poll, opposition to increased offshore drilling has grown 10 points since May and is now twice as high as it was in 2008. Fifty-eight percent of those questioned support a six-month moratorium on new drilling in the Gulf and other offshore sites; 68 percent favor increased regulation of the oil industry in this country.

END_OF_DOCUMENT_TOKEN_TO_BE_REPLACED

[Updated at 1:47 p.m.] Secretary of State Hillary Clinton announced the United States will give $60 million to the U.N. Relief and Works Agency for help to Palestinian refugees on Friday, a move designed to improve the lives of 4.7 million people.

The aid comes as the United States and the international community struggle to provide increased aid to Palestinians living in Gaza. In May, in a deadly clash aboard a flotilla carrying aid to Gaza, Israeli forces killed nine activists. Israel subsequently has said it will ease restrictions on aid going into Gaza but will not end its naval blockade.

END_OF_DOCUMENT_TOKEN_TO_BE_REPLACED 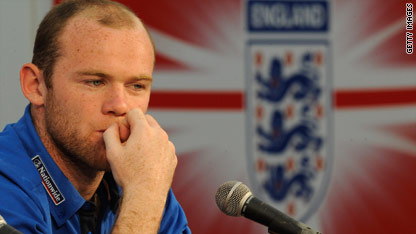 The Lakers claimed another NBA championship last night ŌĆō the teamŌĆÖs fifth title in 11 seasons and 16th overall ŌĆō but thereŌĆÖs plenty to look forward to this weekend (all times Eastern) including a smorgasbord of World Cup soccer and the U.S. Open golf championship.

-England vs. Algeria (2:30 p.m., ESPN2)
After Robert GreenŌĆÖs catastrophic goaltending blunder against the United States, England returns to the pitch in a game they must win. Algeria lost its opening match to Slovenia and sit at the bottom of Group C. With the likelihood of goal differential separating the top teams, England needs as many goals as possible. It also needs Green to have a clean game for his mental health.

END_OF_DOCUMENT_TOKEN_TO_BE_REPLACED

The ISAF said the two troops were American.

The acting president of Kyrgyzstan said when it comes to the recent ethnic clashes in her country, she would "multiply the official [death] figure by ten," according to the Russian news website Kommersant.

Roza Otunbayeva told Kommersant many deaths in the countryside were not part of the official total of yet, which the Kyrgyz news agency Kabar places at 191, according to the Kyrgyz Health Care Ministry.

In a separate interview in Osh, the iterim president called for reconciliation between the Kyrgyz and Uzbeks.

"By all means, we have to give hope that we shall restore the city, return all the refugees and create all conditions for that. I think the entire world will be helping us, because we two peoples have the goodwill to live in peace and friendship together," said Otunbayeva.

END_OF_DOCUMENT_TOKEN_TO_BE_REPLACED

At least five people were killed and 52 others were wounded in a car bombing north of Baghdad on Friday afternoon, police told CNN.

Police said the car bomb was parked outside the house of a Salaheddin provincial council member in a residential area in the town of Tuz Khurmato, a disputed territory 90 kilometers southwest of Kirkuk between the central government in Baghdad and the Kurdistan Regional Government in the north.

END_OF_DOCUMENT_TOKEN_TO_BE_REPLACED

Margi Schuke, 70, died when her house in Almora was destroyed by a tornado, said Otter Tail County spokesman David Hauser.

END_OF_DOCUMENT_TOKEN_TO_BE_REPLACED

[Updated at 9:50 a.m.] Here are the latest developments on the oil disaster in the Gulf of Mexico, which unfolded after an explosion aboard the drilling rig Deepwater Horizon on April 20:

- CNN brings you an account of the night the Deepwater Horizon oil rig exploded based on exclusive interviews with five survivors and three of their wives conducted by CNN's Anderson Cooper and the CNN Special Investigations Unit. The interviews paint perhaps the most detailed picture yet of what happened - and the possible causes of the explosion. CNN producers Scott Bronstein and Wayne Drash report.

"It is frustrating because it doesn't seem like the left hand knows what the right hand is doing," he said in a statement on his website. "There is no streamlined system here. This is why we keep stressing that we need to see more of a sense of urgency from the Coast Guard, federal officials and BP. We are in a war here - we are in a war against this oil that absolutely threatens our way of life."

END_OF_DOCUMENT_TOKEN_TO_BE_REPLACED 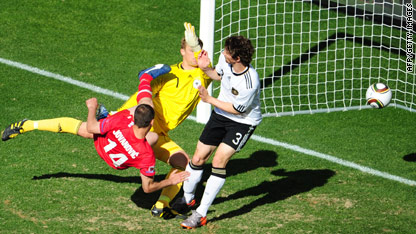 Milan Jovanovic's goal for Serbia gave them a huge win over Germany.

A first half goal from Milan Jovanovic gave Serbia a shock 1-0 win over 10-man Germany at the World Cup on Friday to throw group D wide open.

Germany suffered an early blow in Port Elizabeth when leading striker Miroslav Klose was sent off for his second yellow card, shortly before Jovanovic fired Serbia in front. Lukas Podolski then saw his second half penalty, given following a handball by Nemanja Vidic, blocked by Serbian goalkeeper Vladimir Stojkovic.

The result was perennial challengers Germany's first defeat at the group stage of a World Cup tournament since 1986, when then-West Germany were beaten by Denmark. That year, West Germany went on to reach the final.

END_OF_DOCUMENT_TOKEN_TO_BE_REPLACED

On the Radar: Oil disaster, stimulus, days with dad

Gulf oil disaster - As oil continued gushing into the Gulf of Mexico from BP's ruptured deepwater well Friday, the political firestorm sparked by the environmental disaster showed no signs of slowing. Lawmakers said many questions remained after BP CEO Tony Hayward faced a bipartisan barrage of criticism during a heated day of testimony Thursday on Capitol Hill. "It was frustrating, not just to me but to the American people," Rep. Bart Stupak said Thursday on CNN's "John King, USA."

Across the pond, reaction was mixed: British commentators and media were split by the performance of the BP boss, with some analysts backing Hayward and others criticizing his performance and approach.

In Florida,┬Ā the U.S. Fish and Wildlife Service says that it will use aerial flights to┬Ācheck on┬Āmanatees and other wildlife as staff monitors the flow of the black crude across the Gulf. Officials worry that would-be rescuers face a difficult task┬Ātrying to save such a large population of manatees as the animals leave Florida and spread out along the Gulf Coast.

END_OF_DOCUMENT_TOKEN_TO_BE_REPLACED 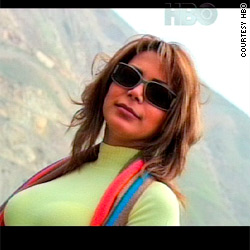 The night before she was killed on the streets of Tehran, the woman the world would come to know simply as Neda had a dream.

"There was a war going on," she told her mother, Hajar Rostami, the next morning, "and I was in the front."

Neda's mother had joined her in the street protests that erupted after Iran's disputed June 12, 2009, presidential election. But on that fateful morning, she told her daughter she couldn't go with her. As Neda prepared to leave,┬Āshe was filled with anxiety, her mother told CNN last November.

"I told her to be very careful, and she said she would."

On June 20, Neda headed to Tehran's Nilofar Square, where thousands of protesters gathered. Tear gas was lobbed at the crowd. Her eyes burning, Neda headed to a medical clinic to get them washed. As she walked toward her car, a single bullet struck her chest, and Neda, 26, was dead. It was captured on video by bystanders and the graphic images were sent around the world.

Journalist Saeed Kamali Dehghan traveled to Tehran to interview Neda's relatives for a new HBO documentary on her life and her tragic death.┬Ā"For Neda" airs Sunday on HBO and can be seen on HBO's website.

END_OF_DOCUMENT_TOKEN_TO_BE_REPLACED

An update from London on some international stories we expect to develop on Friday:

Kyrgyzstan killings - A U.S. official has called for a "substantial" investigation into the killings of more than 170 people during recent ethnic clashes in Kyrgyzstan. Assistant Secretary of State Robert Blake was at a refugee camp near the border in Uzbekistan, where thousands of ethnic Uzbeks fled violence in neighboring Kyrgyzstan.

Mine blast - Rescue operations have been halted at a coal mine in northwest Colombia where an explosion killed at least 11 miners and trapped 62 others, a state governor says.┬Ā