Ex-NBA star Manute Bol dead at 47: Manute Bol, one of the tallest players in NBA history, died Saturday at the age of 47, a spokeswoman with the University of Virginia Medical Center said.

Mexican officials: Guadalupe mayor shot dead: Gunmen shot and killed the mayor of the Mexican town of Guadalupe as his wife and child watched, the mayor of nearby Ciudad Juarez said.

A fire in Chicago's subway system Sunday left at least 12 people with smoke-related injuries, and five of those people were in serious condition, according to a fire official.

END_OF_DOCUMENT_TOKEN_TO_BE_REPLACED 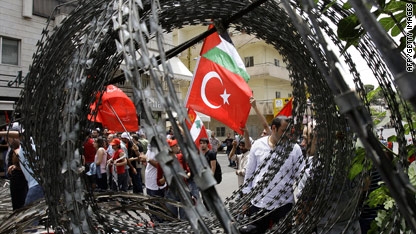 Protesters June 6 outside the U.S. Embassy in Turkey.

Israel plans to ease its blockade of Gaza, a source from the prime minister's office told CNN.

"Israel has decided to enable the flow of all civilian goods into the Gaza strip. From today, there is a green light approval for all goods to enter into Gaza except for military items and materials that can strengthen Hamas' military machine," the source said. FULL STORY