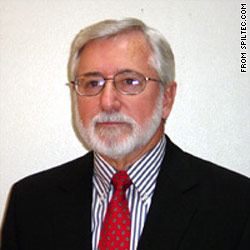 One of the country's most experienced oil spill experts told CNN that he believes very strongly that BP is doing everything it can to clean up the disaster in the Gulf.

Allen said he was contacted by BP on day three of the oil disaster and is now under contract to the oil company.

He said there are three proven methods of cleanup: dispersants, skimming and burning. Allen said BP is doing all three of these things in "unprecedented" measure.

Allen's company is called Spiltec, and according to his website biography, he has more than 38 years of experience as a technical adviser and field supervisor involving hundreds of oil spills around the world. He has developed strategies and equipment for the prevention, surveillance and control of oil spills and has conducted hundreds of oil-spill training courses under all kinds of weather conditions.

Allen has worked on many well-known oil disasters, including the 1969 Santa Barbara blowout, the 1989 Exxon Valdez grounding , the 1991 Gulf of Arabia war-related spills, and the 2004 release of crude oil from a tanker to the waters of Puget Sound, Washington.

Citizens of Fremont, Nebraska, are scheduled to vote in a special election on Monday that has divided friends and neighbors there and focused national attention on the town of some 25,000 people.

The Lincoln Journal Star reports that Wiegert, along with Fremont residents Jerry Hart and Wanda Kotas, formed the group Fremont for Illegal Immigration Enforcement, circulated petitions, and filed the lawsuit that forced the election.

Voters will decide on whether or not Fremont businesses should be banned from hiring illegal immigrants and landlords should be forbidden from renting to them.

"We've said this repeatedly," Wiegert said. "We are not against immigration. We are against illegal aliens."

The Boston Globe reports that two weeks ago, Balderas tried to board a flight from San Antonio, Texas,Â to Boston, Massachusetts,Â with his student ID and Mexican consular card, because he had lost his passport while visiting his mother. He was arrested, and the newspaper reports that the former high school valedictorian then contemplated suicide.

According to The Globe, his arrest drew international attention, and his supporters say that cases like his show why the Dream Act needs to be passed. The pending federal legislation would allow students who are undocumented to apply for legal permanent resident status, protect them from deportation, and make them eligible for student loans and federal work-study programs.

Balderas issued a statement on Facebook: "I am humbled and extremely grateful for all the support that I have received from all of my friends, my community, Harvard, and people that didn't even know me," wrote Balderas. "I feel very relieved that I will have the opportunity to continue my studies at Harvard."

The South African was on call one night four decades ago when a devastated rape victim walked in. Her eyes were lifeless; she was like a breathing corpse.

"She looked at me and said, 'If only I had teeth down there,'" recalled Ehlers, who was a 20-year-old medical researcher at the time. "I promised her I'd do something to help people like her one day."

A woman inserts the latex condom like a tampon. Jagged rows of toothlike hooks line its inside and attach on a man's penis during penetration, Ehlers said. Once it lodges, only a doctor can remove it - a procedure Ehlers hopes will be done with authorities on standby to make an arrest.

"It hurts. He cannot pee and walk when it's on," she said. "If he tries to remove it, it will clasp even tighter."

The 47-year-old Irish artist reacted to Pope Benedict's statement in May that gay marriage is one of the most "insidious and dangerous" threats to the world by painting a canvas called "You May Now Kiss The Groom."

The website ClickLiverpool.com reports that the image of the Pope marrying two gay men may trigger a storm of protest in Ireland and around the world.

Sharkey said, "I am familiar with the traditional stance which the Catholic Church is expected to take, but I just felt condemning thousands of innocent people with such strong remarks is both un-Christian and insulting."

The artist added, "When I think all the evil in the world, from terrorism, to disease, to famine, I find it horrifying that a man with the Pope's incredible power and influence can only focus on something as minor as gay marriage."

In an e-mail to CNN, Sharkey said the painting will be on display beginning Monday in a Dublin, Ireland,Â gallery.